Civil servants return to the office 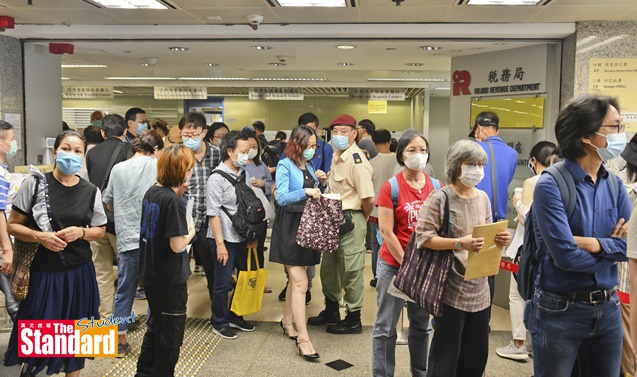 PEOPLE rushed to government service centres, after most civil servants returned to their post on 4 May after three months of working at home amid the pandemic.

A bus driver surnamed Tsang, whose licence will expire in July, travelled from his home in Yuen Long to the office in Cheung Sha Wan.

“I thought the licensing service had fully resumed so I came here to renew my license,” Tsang said. “But I did not bring a cheque and a return envelope, so I cannot schedule my application. I have to come again after their service resumes fully.”

The Immigration Department allowed a small walk-in quota for most of its services on the morning of 4 May, while its smart identity card replacement centres were available for card collection and scheduled applications. Immigration officers came outside the building to provide assistance and maintain order in the queue.

Road tests for driving assessments resumed, but some candidates were miffed over the belated announcement.

A woman named Ko said she was scheduled to take the road tests on 4 May, long before the Covid-19 outbreak, but then the Transport Department notified her in February that her test was postponed.

“But the department only notified me again on 30 April that I will take my road test as scheduled, which disrupted my plans,” Ko said. “If the Transport Department could notify us a bit earlier, I believe it would be easier for driving instructors and candidates to make appointments for extra lessons before their actual assessment.”

At the Central Government Offices at Tamar, the body temperature of those entering buildings was checked. Sanitising carpets and alcoholic gel dispensers were also in place.

“This is the right time to return to our offices and resume work, as there are no local infections recently,” said a Development Bureau staff member surnamed Wong. “I was worried in the earlier stages of the outbreak, but I am less stressed right now.”

Secretary for the Civil Service Patrick Nip Tak-kuen (聶德權) said the return of civil servants to their offices went smoothly, but he reminded them to remain alert.

“There is appropriate personal protection equipment in every office,” he said. “Everyone should be on high alert. I suggest narrowing down the number of meeting participants or using video conferences instead.”

About 4,800 government employees, representing 3 percent of the total number of civil servants, will continue to work from home full time.