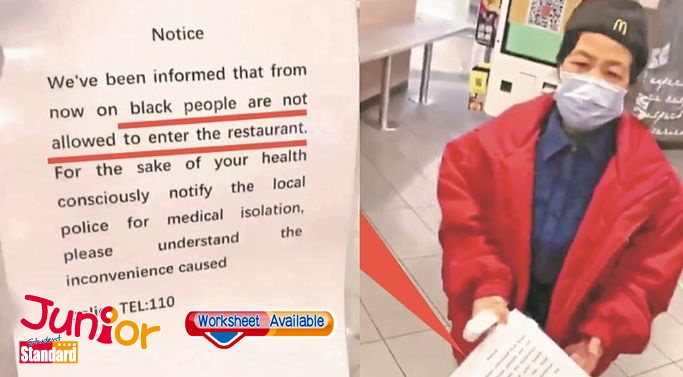 US chain McDonald’s has apologised after a sign telling “black people” they were banned from entering a branch in Guangzhou (廣東) prompted outrage online, following reports of discriminatory treatment toward Africans in the city.

Tensions have flared between police and Africans in the city after local officials announced a cluster of Covid-19 cases in a neighbourhood with a large migrant population.

As the row escalated, posts widely shared online showed a sign at a McDonald’s saying black people were not allowed to enter the restaurant.

The chain apologised and a spokesman for McDonald’s said the notice is “not representative of our inclusive values”.

McDonald’s said it removed the sign and temporarily closed the Guangzhou restaurant “immediately upon learning of an unauthorised communication to our guests”.

Several Africans have said they had been forcibly evicted by police from their accommodations, refused service at shops and restaurants, and were subject to mass testing and arbitrary quarantines.

Chen said the Guangdong government is“constantly taking measures to improve” and acting“according to the principle of non-discrimination”.

(This article is published on Junior Standard on 23 April 2020)