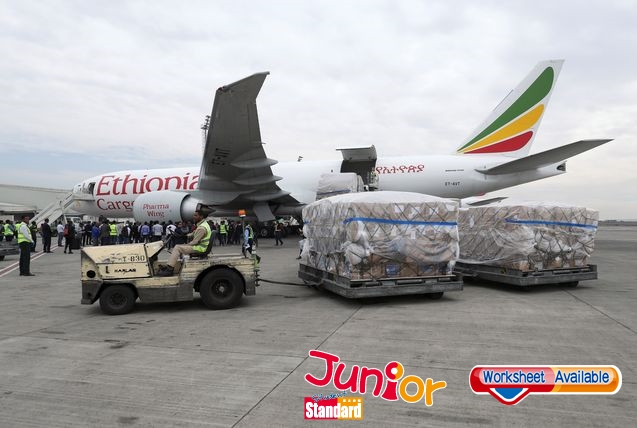 THE first planeload of protective and medical equipment donated to Africa (非洲) by Chinese billionaire and Alibaba (阿里巴巴) co-founder Jack Ma (馬雲) to help fight the coronavirus arrived in Ethiopia (埃塞俄比亞) on 22 March.

So far, the continent of 1.3 billion people has registered only 1,100 cases across 41 countries – less than 0.3 percent of the world’s total. There have been 37 deaths. But there are fears that a relatively poor health infrastructure means Africa will not cope if the virus becomes established.

It said the supplies would be distributed across Africa, going first to countries that are particularly vulnerable to the pandemic.

Governments across the continent have been imposing tough measures to restrict travel and close public spaces. The World Health Organisation (WHO, 世衞) is planning to help countries set up pop-up hospitals that could be equipped with oxygen and ventilators.

Part of Africa’s battle to stop the virus from taking hold could be fought in the churches where many of its over 600 million Christians go to pray.

Kenya (肯亞), which had 15 confirmed cases, on 22 March banned all religious and social gatherings, limited the number of mourners at funerals to 15, and ordered all nightclubs and bars to close indefinitely.

(This article is published on Junior Standard on 30 March 2020)