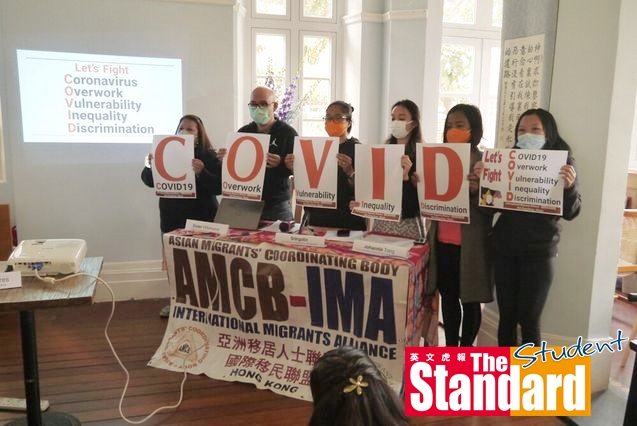 THE coronavirus pandemic in Hong Kong has made the SAR’s foreign domestic workers more marginalised and vulnerable – with up to 55,000 not having face masks provided by employers, according to a survey.

The Asian Migrants Coordinating Body, which conducted the online survey, called on the government’s policy on Covid-19 to be more inclusive and non-discriminatory by controlling the prices of masks and alcohol rubs and extending the HK$10,000 subsidy to the city’s 390,000 helpers, like all other Hong Kong residents.

Sringatin, an Indonesian (印尼的) spokeswoman for the groups, underlined two cases seen by the Mission for Migrant Workers.

One involved a helper who was isolated in a room after she developed fever and was given just rice and water for two days. Her employers did not send her to hospital for fear of contracting Covid-19.

Another was forced to share her bedroom with her male employer, who was selfquarantining for two weeks, she said.

The 1,127 respondents to the survey comprised 54 percent Filipinos, 44 percent Indonesians, and the rest Thai (泰國人) and Sri Lankans (斯里蘭卡人).

Between 11 and 14 percent of the respondents said they did not receive masks or sanitiser from their employers, indicating about 43,000 to 55,000 helpers did not have protection against the virus.

“We estimate with these findings that another 206,000 migrant domestic workers are at risk because of lesser protections given to them,” co-spokesman Eman Villanueva said, adding that more than one third of workers had to buy their own masks in the past month, which cost them at least HK$200 for a box of 50 masks.

Meanwhile, the survey also found they did more cleaning (80 percent), cooking (50 percent) and child-caring (30 percent), and were sent out to run errands (15 percent) amid the pandemic.

Nearly two out of five were not allowed to go out during the past month by employers on their rest day, with almost half not given any rest days at all, the survey found.

Of the given rest days, 23 percent did not leave their employer’s flat, while one in four were asked to come home earlier than usual.