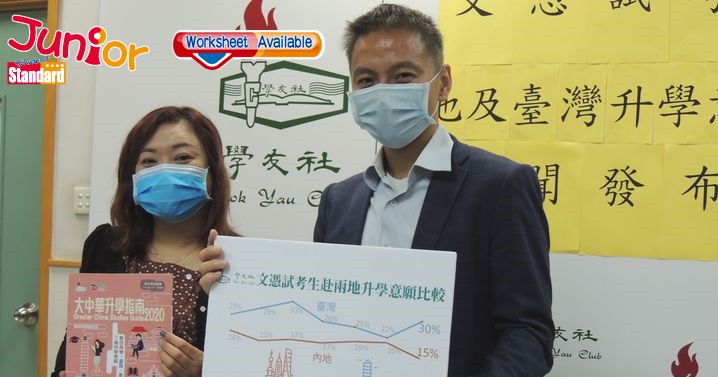 STUDENTS who will be sitting for the Diploma of Secondary Education Examination (DSE) this year have expressed less interest in furthering their studies in the mainland (內地) compared to last year while more are eyeing Taiwan (台灣), according to a survey by the Hok Yau Club (學友社).

This is attributed to the eight months of social unrest in the Hong Kong.

The club interviewed 1,308 DSE students between December and January. Only 15 percent professed an interest in seeking higher education in the mainland – a drop of 5 percentage points from last year’s survey.

But those interested in studying in Taiwan increased from 22 percent last year to 30 percent.

Ng Po-shing (吳寶城), a student guidance consultant for the club, said the trend “obviously has to do with political factors”.

He noted that the number of students opting for mainland institutions this year would be similar to the year after 2014’s Occupy Movement. And around 35 percent of those aiming to study in the mainland had been encouraged by family or friends.

“Parents of students originally from the mainland are worried their children might face peer pressure and discrimination in Hong Kong,” Ng added. The survey last year found that more students were contemplating studying in the mainland than in Taiwan.

(This article is published on Junior Standard on 18 March 2020)

HK students choosing to study on the mainland