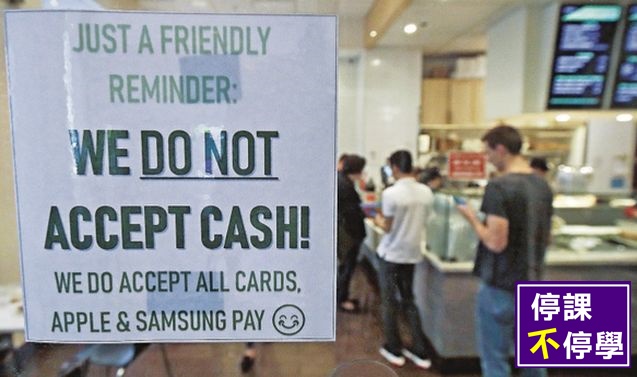 The city is joining Philadelphia (費城) and New Jersey (新澤西) in banning a growing paperless practice that critics say discriminates against lowincome people who may not have access to credit cards.

Vallie Brown, a lawmaker, said the new law “will go far in ensuring all San Franciscans have equitable access to the city’s economy”.

Highly-paid tech workers who ﬂock to San Francisco to work for Facebook, Google, Uber and Airbnb may like the ease of paying by credit card, debit card or smartphone, but many low-income people, including more than 4,000 who sleep on San Francisco’s streets every night, likely do not have the money to sustain bank accounts.

Some people also prefer to use cash because they do not want to leave a digital trail of where they have been and what they have bought.

The new law requires brick-and-mortar businesses to accept cash for goods and some services. Temporary pop-up stores and internet-only businesses such as ride-hailing companies would be exempt.

The effort to ban the card-only practice came after last year’s rollout of cashless Amazon Go stores. The retail giant subsequently bowed to pressure and agreed to accept cash at many of these stores.