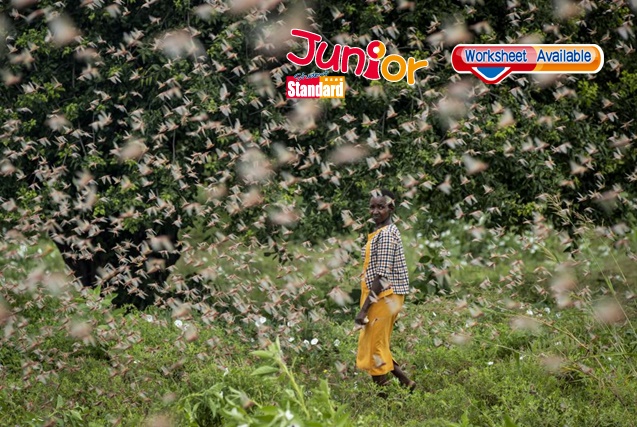 THE hum of millions of locusts on the move was broken by the screams of farmers and the clanging of pots and pans. But their noisemaking did little to stop the voracious insects from feasting on their crops in this rural community.

The worst outbreak of desert locusts in Kenya (肯尼亞) in 70 years has seen hundreds of millions of the bugs swarm into the East African nation from Somalia (索馬里) and Ethiopia (埃塞俄比亞).

Those two countries have not had an infestation like this in a quarter-century, destroying farmland and threatening an already vulnerable region with devastating hunger.

“Even cows are wondering what is happening,” said Ndunda Makanga, who spent hours trying to chase the locusts from his farm. “Corn, sorghum, cowpeas, they have eaten everything.”

Even a small swarm of the insects can consume enough food for 35,000 people in a single day.

When rains arrive in March and bring new vegetation across much of the region, the numbers of the fast-breeding locusts could grow 500 times before drier weather in June curbs their spread.

“We must act immediately,” said David Phiri of the UN Food and Agricultural Organization (聯合國糧食及農業組織).

About US$70 million (HK$543m) is needed to step up aerial pesticide spraying, the only effective way to combat them, the UN says. That will not be easy in Somalia, where parts of the country are in the grip of the al-Qaida-linked al-Shabab extremist group.

(This article is published on Junior Standard on 17 February 2020)