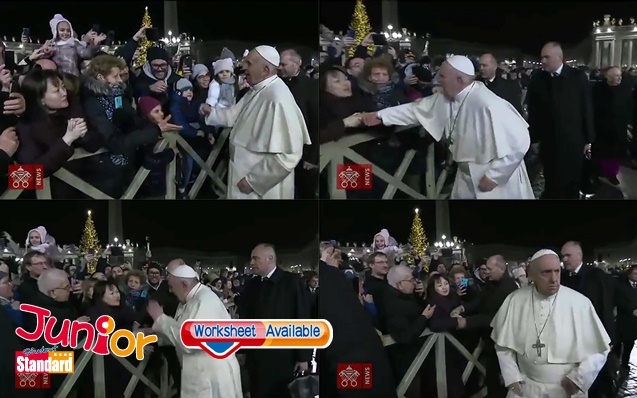 POPE Francis (教宗方濟各) has apologized for angrily slapping a woman’s arm when she grabbed hold of his hand and yanked him towards her, saying he had lost his patience and set a “bad example”.

His unusual apology came on 1 January after he used his first homily of the new year to denounce violence against women, which he compared to profaning God.

Pope Francis, age 83, had a sharp encounter with a woman the evening before during a walkabout in St Peter’s Square (聖伯多祿廣場).

The pilgrim, who has not been identified, unexpectedly seized his hand and pulled him towards her, causing him evident alarm. A clearly disgruntled Francis wrenched himself free by slapping her arm.

“So many times we lose patience, even me, and I apologise for yesterday’s bad example,” the Pope told thousands of pilgrims gathered in St Peter’s Square last Wednesday at the end of the traditional New Year Mass.

“All violence inflicted on women is a desecration of God,” he told a packed St Peter’s Basilica. “How often is a woman’s body sacrificed on the profane altar of advertising, profit and pornography,” he said. He added that the female body “must be freed from consumerism, it must be respected and honoured”.

The leader of the Roman Catholic Church said last April that the Church had to acknowledge a history of male domination and sexual abuse of women.

A month later, he appointed for the first time four women to an important Vatican (梵諦岡) department that prepares the major meetings of the world’s bishops.

(This article is published on Junior Standard on 9 January 2020)

Pope at Angelus: 2020 a year to cultivate hope and peace
bit.ly/36nuliU