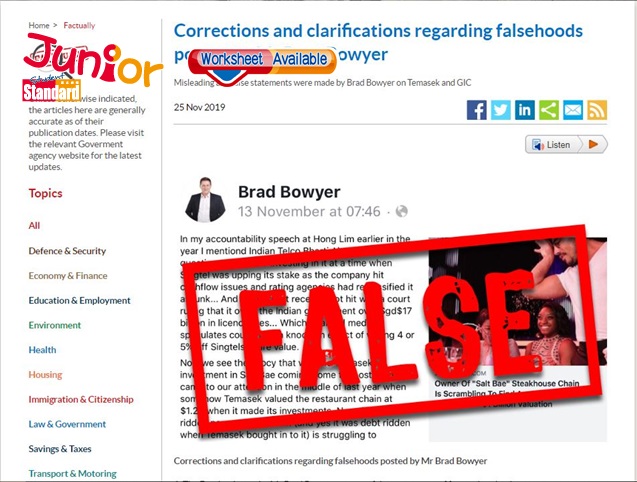 SINGAPORE’S government has invoked its new law against online ‘fake news’ for the first time, the island’s Straits Times (海峽時報) reports.
Using the Protection from Online Falsehoods and Manipulation Act (Pofma), which came into force on 2 October, the Pofma Office directed opposition party member Brad Bowyer to include a correction notice in an earlier Facebook post.
Bowyer’s original Facebook post included comments on the government’ s involvement in investment decisions by companies Temasek and GIC as well as Keppel Corporation’s finances.
Bowyer has since included a correction note on his original post with a link to a 15-point statement on a government website detailing what are deemed “false statements of fact and misleading statements” in Bowyer’s original post.
Straits Times says this is the first instance in which the Singapore government has invoked the act.
It reported that in a separate statement on 25 November, the Ministry of Finance, Heng Swee Keat (王瑞杰), said: “Mr Bowyer’s post contains clearly false statements of fact, and undermines public trust in the Government.”
Pofma allows the government to act against false or misleading information online, if it is in the public interest to do so, covering factors such as the country’s security or foreign relations.
The law was controversial, with the government saying that it protects citizens from fake news and critics saying that it poses a serious threat to civil liberties.


(This article is published on Junior Standard on 03 December 2019)