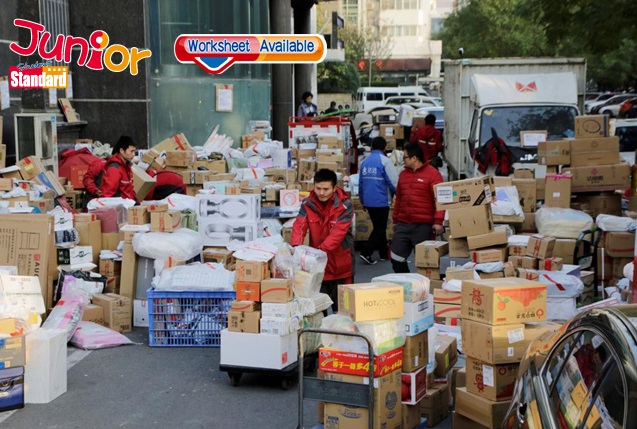 ACCUMULATED waste from China’s e-commerce and express delivery sectors stands to more than quadruple by 2025 unless action is taken to rein it in, green groups said on 11 November, as the online shopping spree known as Singles’ Day (光棍節) broke new sales records.
The volume of packaging material used by the sectors hit 9.4 million tonnes last year, and is on course to reach 41.3 million tonnes by 2025 if they keep up the rate of increase, Greenpeace (綠色和平) and other nongovernment bodies said in a report.
“The e-commerce giants have barely offered even superficial responses,” said Tang Damin (唐大旻), a plastics campaigner with Greenpeace in Beijing. “They’re biding their time for regulation to come out.”
Sales hit 84 billion yuan in the first hour of the Singles’ Day annual event, up 22 percent from last year, China e-commerce giant Alibaba (阿里巴巴) Group said.
As e-commerce giants work to extend their reach into rural regions, 1.88 billion packages were delivered from 11 to 16 November last year, an annual increase of 26 percent, the State Post Bureau (國家郵政局) said.
There is no official figure for the waste generated, but Greenpeace estimates it to have exceeded 250,000 tonnes. China has moved to turn recycling into a profitable business but it has yet to tackle e-commerce waste, only recycling around 5 percent of plastic packaging.
Last month, China’s market regulator published new draft packaging standards that will restrict courier firms to an approved list of recyclable material.

How to reduce your Amazon packaging waste
http://bit.ly/2q19pyB