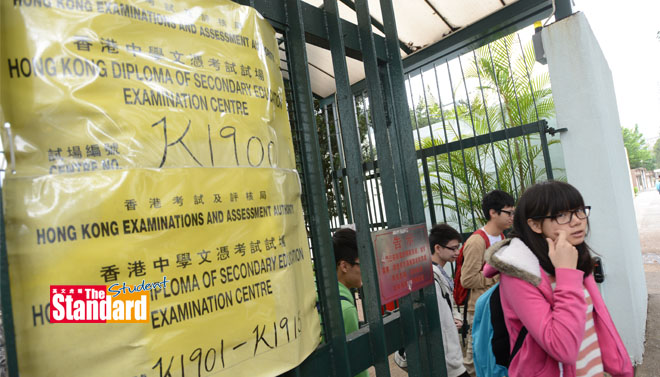 THE listening part of this year’s Chinese-language examination for the Hong Kong Diploma of Secondary Education (HKDSE, 香港中學文憑考試) was on Tuesday criticised as being politicised.

The recorded content in the listening and integrated Chinese-language skills papers centred on the scenario of a student union election.

Two students and a teacher can be heard in the recording discussing human ability and integrity, using a metaphor involving a dog and a lion.

Some candidates said the taped scenario seemed to be associated with issue of the chief executive election.

A Chinese teacher at Kiangsu-Chekiang College (蘇浙公學) said the exam questions were easier than last year’s.

She said the Chinese-language exam may have included political elements due to the influence of Liberal Studies and said students should pay attention to public affairs.

That came a day after the composition paper was hit by the same flak.

An online uproar broke out one day earlier over claims the composition section of this year’s Chinese language examination for secondary students was politicised.

Online users linked the three topics to political issues – such as the June 4 incident and political reform – though the Hong Kong Examinations and Assessment Authority (HKEAA, 香港考試及評核局) said they were aimed at prodding students to express their creativity.

The authority denied the topics had a political tinge. “The paper is to examine the ability of formulating ideas, expression and creativity of candidates,” a spokeswoman said.

“Candidates can select topics from personal life experiences and they are not limited to any topics. They can tag in from either an emotional or rational aspect and express their thoughts on their preference for being ‘silent’.”

Meanwhile, a photograph has been uploaded on an online forum, with the person who did it saying he found a candidate’s barcode – which is not supposed to be removed from an exam hall – on a table after he finished his meal. It showed the candidate number and the subject name as Chinese-language listening test.

The HKEAA is understood to be following up the case.