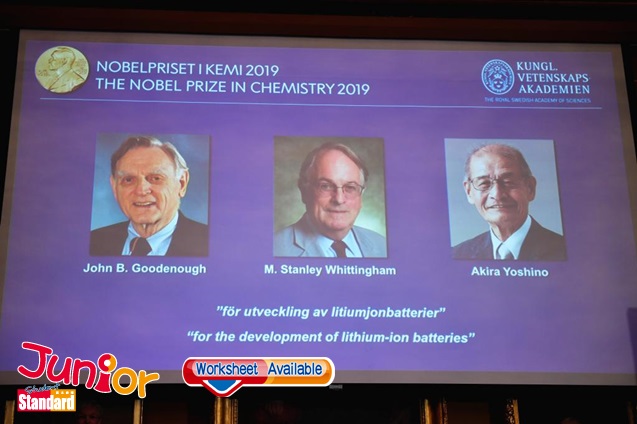 IF you use your smartphone or a laptop computer every day, you can thank the three winners of this year’s Nobel Prize (諾貝爾獎) in chemistry for their work on lithium-ion batteries.
These batteries power mobile phones, laptops, electric cars and countless other devices used today, and could become the foundation for a greener future.
Batteries that economically store energy from renewable sources like the wind and Sun open up new possibilities to curb global warming.
The prize went to John B Goodenough, age 97, an engineering professor at the University of Texas; M Stanley Whittingham, 77, a chemistry professor at the State University of New York at Binghamton; and Akira Yoshino, 71, of chemical company Asahi Kasei Corp and Meijo University in Japan (日本).
The three scientists each had unique breakthroughs that laid the foundation for the development of a commercial rechargeable battery, an alternative to older alkaline batteries containing lead, nickel or zinc that had their origins in the 19th century.
Goodenough is the oldest person ever to win a Nobel Prize – edging out Arthur Ashkin, who was 96 years old when he was awarded the Nobel for physics last year.
In Japan, Yoshino said he hoped the technology could enable a greater adoption of renewable energy sources. “We must create a society where electricity is generated by renewables in order to resolve the climate change problem,” he said.

(This article is published on Junior Standard on 17 October 2019)