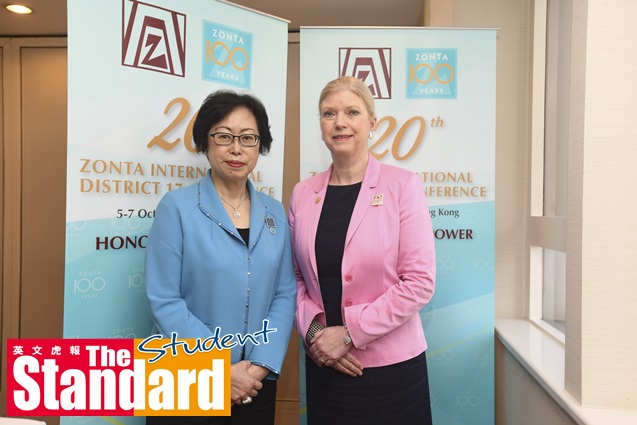 A THREE-DAY meeting for Zonta International in Hong Kong ended on 7 October with over 400 female executives and professionals vowing to say “no” to violence against women and child marriage.
The 20th gathering for the organisation’s District 17 conference, bearing the theme “Honour and Empower”, took place at the Convention and Exhibition Centre and brought together leading lights from the Philippines (菲律賓), Thailand (泰國), Singapore (星加坡) and Macau.
“We shall continue to empower women and girls through education and say ‘no’ to violence against women and child marriage however challenging the time may be,” declared Teresa Lin Lau Shuk-ying, the governor of one of Zonta’s largest regional groups, District 17.
As the president of Zonta International, Susanne von Bassewitz of Germany (德國), pointed out: “It will be a long journey to break the glass ceiling, but we have to continue this work for women and help create a better world.”
District awardee Carmen Valdez was honoured for her advocacy for women’s rights and female empowerment, especially for those who suffered sexual and physical violence.
She shared her own experience of abuse and urged everyone to support victims.
Interactive workshops were also held, with panels of speakers and facilitators covering topics such as “Enhancing Zonta’s social impact around the world” and “How to nurture women’s talents in science and technology.”
Zonta International, which promotes service and advocacy, was founded in 1919 in the United States.
In marking its 100th anniversary, Zonta is pushing hard to see women establishing themselves in executive positions and developing a network spanning professions around the world.
For example, there is still room for improvement regarding women in Hong Kong. In many Hong Kong companies, only 10 to 20 percent of the board of directors are women. The supposed reasoning behind this is that many women in middle management eventually stop working to take care of their family.
Lin said that she hopes the Hong Kong government would relieve some of the pressure that working mothers in Hong Kong face, by improving the educational system and providing more supporting measures for childcare.
In many countries in the Middle East (中東) and Africa (非洲), many girls under 18 years are married off to much older men, despite local laws against child marriage.
Some of these girls get married at ages as young as 11. Then these girls become mothers soon after, and so most of them do not get a chance to complete their education.

Ideas on using ...
FROM the area surrounding Shau...

Youths push for...
A CONCERN group urged the gove...