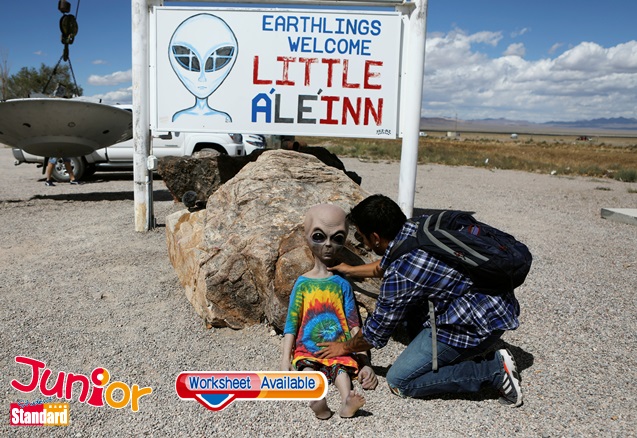 SCORES of UFO enthusiasts converged on rural Nevada (內華達州) for a pilgrimage of sorts to the US installation known as Area 51, long rumoured to house government secrets about alien life.
Visitors descended early in the day on 19 September on the tiny desert town of Rachel, a short distance from the military site, in response to a viral social-media invitation to ‘storm’ Area 51 the next day.
The call was made in June by California (加州) college student Matty Roberts who posted a facetious Facebook invitation exhorting the public at large to run into Area 51 on foot to “see them aliens”.
It raised concerns by local authorities of unruly crowds overwhelming the community. Situated about 240 km north of Las Vegas (拉斯維加斯), the remote hamlet of just 50 year-round residents lacks a grocery store or even a petrol station.
More than one million people had expressed interest, but in the end only a few thousand turned up at the town and a few hundred outside the Area 51 facilities.
The visitors established a small encampment outside Rachel’s only business – the extraterrestrialthemed Little A’Le’Inn motel and restaurant – parking themselves in cars, tents and RVs. Some tourists hung inflatable aliens from their campers.
One couple, Nicholas Bohen and Cayla McVey, both sporting UFO tattoos, travelled to Rachel from the Los Angeles (洛杉磯) suburb of Fullerton with enough food to last for a week of car-camping.
“It’s evolved into a peaceful gathering, a sharing of life stories,” McVey said.


(This article is published on Junior Standard on 30 September 2019)