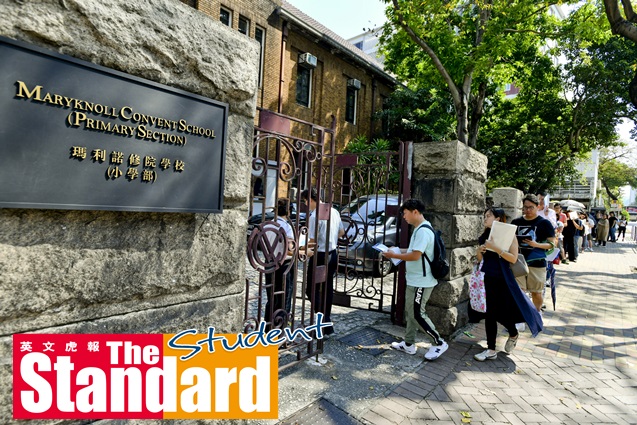 PARENTS rushed to submit applications to aided primary schools as the discretionary places admission process started on 23 September.
However, competition was less intense than last year due to a decrease in the number of students.
Together with his surveyor wife, an engineer rushed to La Salle College, his alma mater, early in the morning to submit an application form for his son.
The father, Wong, feared his son may fail to get into an aided school despite having a high score of 25.
He and his wife applied to more than 10 private and direct subsidy institutions, including Diocesan Boys’ School, Ying Wa College and Po Leung Kuk Choi Kai Yau School.
Their son is getting tutoring in Chinese, English, maths, drawing, Taekwondo and basketball.
Another alumnus, Yeung, said he is prepared for the possibility that his son, who also got a score of 25, may not get in.
Yeung has not prepared his son for admissions, allowing him to play football like he did in his school team. “I read stories with him but did not enroll him in too many courses. I want him to be a happy kid,” he said.
The Primary One Admission System is divided into two stages – the ‘discretionary places admission’ stage and ‘central allocation’ stage.
The deadline for submitting applications for discretionary places is today, 27 September. Those who have not been offered a discretionary place will automatically go into central allocation. Parents will be informed next year in early January to go to a designated central allocation centre to choose schools.
The Education Bureau estimated that the number of eligible Primary One students will be 55,700 for the 2020/21 school year, a drop of 1,600 from this academic year.
There will be 24,310 school places under the discretionary places admission stage. In addition to the central allocation stage, a total of 48,620 primary school places will be available for the next school year, an increase of 88 places from this year.
Discretionary places admission means parents can go to any primary school within their school net and turn in an application form for their children there.
For schools outside that network, parents can only apply to one school. Some parents move to new homes to get a better school net.
The school can then consider two factors: if the child has a sibling attending the school or if the child has a parent working there, and the points system. After the 27 September deadline, the student is automatically entered into the central allocation, in which the parents can choose around three schools.