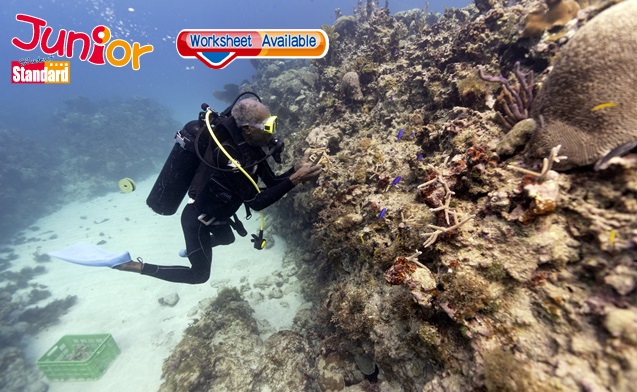 JAMAICA (牙買加) lost 85 percent of its oncebountiful coral reefs in a series of natural and man-made disasters during the 1980s and 1990s, and the damage was thought to be permanent.
But today, the corals and tropical fish are slowly reappearing, thanks in part to a series of careful interventions, not the least of which is the effort of ‘coral gardeners’.
The team of divers carefully tend to the underwater ‘coral nurseries’ on the seabed just like how their landbased counterparts mind a flower bed.
In these nurseries, they slowly and painstakingly pluck off snails and fireworms that feast on immature coral fragments that dangle from suspended ropes.
When each stub grows to about the size of a human hand, the gardeners collect them in crates to individually ‘transplant’ onto a reef, a process akin to planting each blade of grass in a lawn separately.
More than a dozen grassroots-run coral nurseries and fish sanctuaries have sprung up in the country in the past decade.
The delicate labour of the coral gardener is only one part of restoring a reef. Convincing lifelong fishermen to curtail when and where they fish and controlling the surging waste dumped into the ocean are trickier endeavours.
Still, slowly, the comeback effort is gaining momentum.
“The coral are coming back; the fish are coming back,” says marine biologist Stuart Sandin. “When you give nature a chance, she can repair herself. It’s not too late.”

(This article is published on Junior Standard on 25 September 2019)