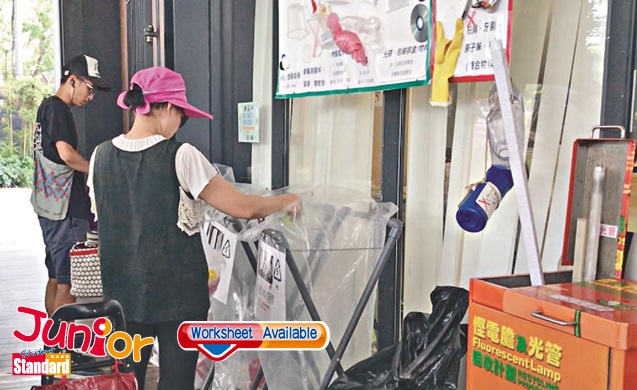 A SHAU Kei Wan (筲箕灣) ‘green station’ has helped collect 1,400 tonnes of materials for recycling since it opened in August four years ago, Secretary for Development Michael Wong Wai-lun (發展局局長黃偉綸) said.
The Eastern Community Green Station (綠在東區), on Oi Shun Road (愛信道), is among the first batch of stations that were commissioned in 2015, along with the one in Sha Tin (沙田).
Five others are in operation in Kwun Tong (觀塘), Yuen Long (元朗), Sham Shui Po (深水埗), Tuen Mun (屯門) and Kwai Tsing (葵青).
The network of green stations was established by the EPD (環保署) to strengthen support for waste reduction and recycling at the district level.
Two stations are under construction in Tai Po (大埔) and on Lantau (大嶼山), while others in Sai Kung (西貢) and Wan Chai (灣仔) are being designed.
Eastern station, operated by the Po Leung Kuk (保良局), mainly provides support for the community in the collection of recyclables such as waste paper, plastic, metals, electrical appliances, fluorescent tubes, glass bottles and rechargeable batteries.
The operator has arrangements with housing estates for the collection of recyclables. It has also set up collection points. The items are delivered to recyclers.
But critics doubt the effectiveness of the stations in increasing plastic waste collection, saying most plastic waste still ends up at landfills.


(This article is published on Junior Standard on 17 September 2019)