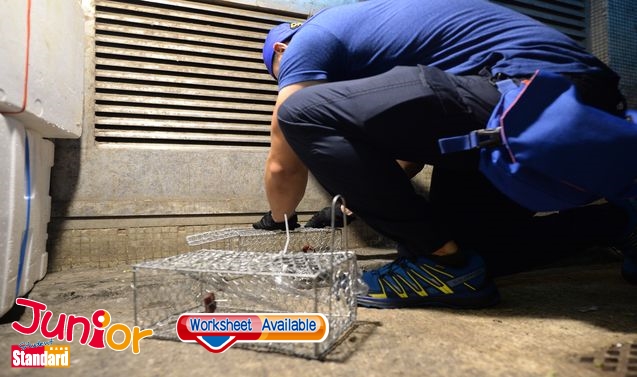 THE government’s rat elimination methods were criticised as being ineffective as it sets out on a three-month city-wide clean-up operation.
It wants to promote rodent control to curb the spread of the hepatitis E virus infection previously only found in rats, following three people being diagnosed with the disease
in mid-May, including one who died.
The cleaning operation started with the area along Stewart Road (史釗域道) in Wan Chai (灣仔) where workers set rat baits and cage traps.
But lawmaker Priscilla Leung Mei-fun (梁美芬), founder of the Alliance to Combat Rodents (撲滅鼠患大聯盟), said the government had done a poor job. Despite having spent HK$1.6
billion in the past decade looking for solutions, the rat infestation has persisted.
“They should engage professionals, skilled labourers who know how to do the job,” she said.
Wong King (黃敬), executive president of the International Institute of Utility Specialists suggested using robots equipped with powerful lenses to reach deep into manholes and
drain pipes to track rats before trapping them.
A ‘rat expert’ from Guangzhou (廣州) said rats have become cleverer and pickier with food choice. “It is definitely ineffective to catch rats by putting a sweet potato in a
cage. It might have been effective 50 to 60 years ago in rural places. But the rats have changed now,” he said. He suggested using honey-scented BBQ pork with a dash of MSG as
bait.