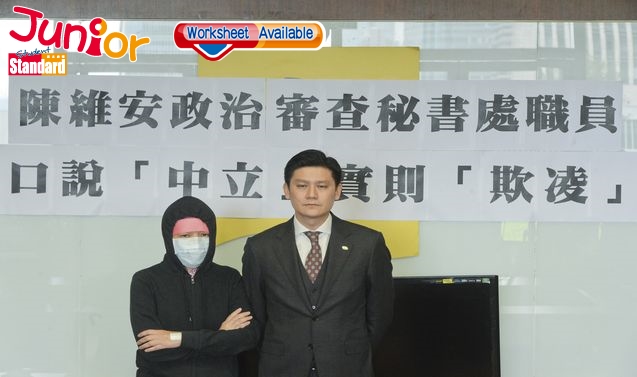 A FORMER female security staff member in the Legislative Council says political screening in the secretariat led to her resignation.
The guard, surnamed Wong, now in her 60s, said at a press conference with legislator Jeremy Tam Manho (譚文豪) that she was told in October 2017 to state her political stance on
a piece of paper that listed all the names and staff numbers of the 15 members of her team. The guards were to check either one of two boxes, written ‘yellow’ and ‘blue’,
signifying support for the pan-democrat camp or the pro-establishment camp respectively, and to sign their names.
Wong refused to do so as she believed Legco staff should maintain political neutrality. But she said her superior started targeting her.
She was berated by her superior for leaving her post without permission after she helped an elderly activist to leave the centre of the road outside Legco and return to the
pavement.
Also, she was deployed only in Legco car parks, and not sensitive work, such as security in the chamber during meetings.
She claimed her superior had told her that Legco secretary general Kenneth Chen Wei-on (陳維安) had decided not to extend her three-year contract when it expired in August this
year.
Legco president Andrew Leung Kwan-yuen (梁君彥) said the matter will be discussed in the Legco commission meeting on 20 May.

(This article is published on Junior Standard on 20 May 2019)

The principle of political neutrality of civil servants
http://bit.ly/2HlyYip