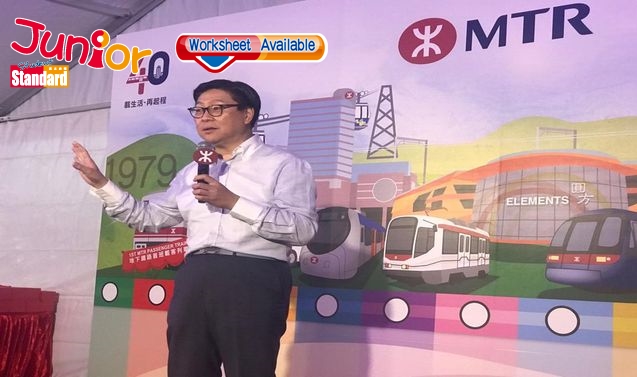 OUTGOING MTR Corp chairman Frederick Ma Si-hang (馬時亨) said that during the 40 years since the first MTR train ran, Hong Kong has changed from being “a go-getting city” to “a city of resentment”.
Ma said when he started working 46 years ago he made HK$1,600 a month. A downtown apartment then sold for about HK$200 per square foot.
Salaries have since risen only 10 times, but housing prices skyrocketed 50 to 100 times and a meal in Central costs 30 times more than before. The lowering quality of life has
created resentment.
He noted that during the same period, the increase in MTR fares was only about four times – less than inflation. The fare between Kowloon Bay and Kwun Tong cost HK$1 in 1979
compared with HK$4.60 for adult Octopus card users now.
Speaking at a media gathering, Ma said the reason so many people complain about MTR fares is because it is a government company.
Ma also said he resents fake news, citing as an example a trip he took to Beijing for a meeting after two trains collided last month, but a report claimed he went to play golf.
But suing media over fake news would be a waste of money and ruin his health so he laughs it off, Ma said.
Ma admitted that controversies surrounding the Sha Tin to Central Link tarnished the MTRC’s “gold painted signboard”, but he believes the rail operator will overcome all
difficulties.

(This article is published on Junior Standard on 15 April 2019)

HK among the world’s unhappiest
http://bit.ly/2uRwaUp