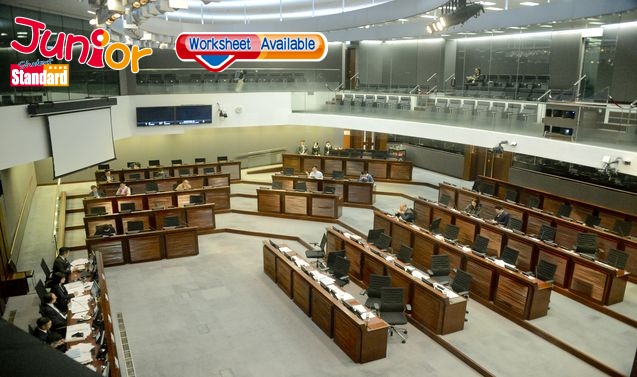 A LEGISLATIVE Council (立法會) bills committee meeting discussing the national anthem law descended into chaos as legislator Ted Hui Chi-fung (許智峯) was forcibly removed from the room and sent to hospital with injuries.
Hui was ordered out by the chairman of the Bills Committee on the National Anthem Bill (國歌條例草案), Martin Liao Cheung-kong (廖長江), who angered lawmakers by setting a deadline for them to file written questions to the government – an unprecedented move to nip filibustering in the bud.
Liao set 22 March as the deadline for the submission of questions, and warned that questions submitted after the deadline would not be handled. This was met with uproar from the pan-democrats.
Kwok Ka-ki (郭家麒) said it was extremely rare for any deadlines to be set for written questions, while Au Nok-hin (區諾軒) said legislators should have the right to file follow-up questions to answers provided.
In response, Liao said he would not stop legislators from questioning officials through other means, like making appointments directly.
When Hui delivered a barrage of questions and ignored Liao’s demands for him to stop, he was removed by four security guards.
Hui accused a guard of bending his wrist and vowed to file a complaint against him. He also filed a report to the police, but the guard claims that Hui hit his colleague.

(This article is published on Junior Standard on 26 March 2019)

Taiwan’s brawling in parliament a way of life
http://bbc.in/2TVI0uz