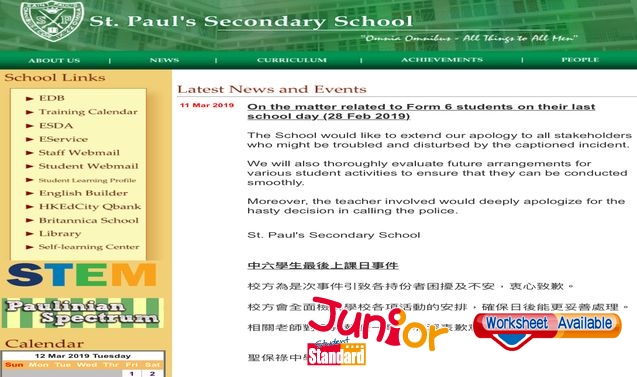 ST Paul’s Secondary School (聖保祿中學) in Happy Valley apologised weeks after a teacher called the police over a group of students taking photographs.
“The school would like to extend our apology to all stakeholders who might be troubled and disturbed by the captioned incident,” it said in an uploaded statement.
“We will also thoroughly evaluate arrangements for student activities to ensure they can be conducted smoothly in the future. Moreover, the teacher involved deeply apologises for the hasty decision in calling the police.”
The apology comes after Secondary Six students took to the internet to complain that they had an “unforgettable” last day of school on 28 February, as the elite girls’ school stopped them from taking farewell photos.
Some students later took photos outside the campus, but a teacher said they were “blocking the street” and called the police. Students were disappointed with how the school handled the matter.
“It is hard to believe that the school would call the police to arrest its students,” one said.
The next day, the school issued a statement saying the teacher had called the police out of concern for the students’ safety, and noted that pupils are not allowed to use phones and cameras on campus without permission.

(This article is published on Junior Standard on 20 March 2019)