Cyclist breaks her own record 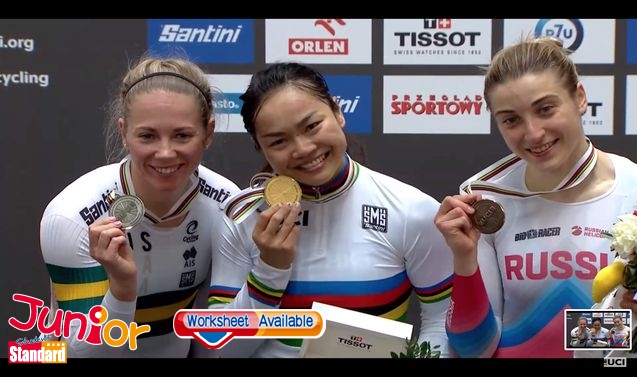 LOCAL cycling sensation Sarah Lee Wai-sze (李慧詩) made history again as she broke her own record upon winning her third rainbow jersey.
She claimed her first keirin world title at the UCI Track Cycling World Championships in Pruszkow, Poland (波蘭), on 3 March, after coming first in a sprint event the day before.
Those who win the championship are awarded a rainbow jersey.
With her finish as the world champion in the 500-metre time trial at the 2013 Track Cycling World Championships, Lee has now secured three jerseys, breaking her own local record set on 2 March.
Lee, age 31, was the oldest cyclist among the six competitors in the final round of the keirin race. She started the race in third place and maintained her position until the last two laps, where she began to up the ante.
She moved to the front of the pack in the final lap, and broke away from the five other cyclists.
Lee crossed the finish line in 11.012 seconds, followed by Australia’s (澳洲) Kaarle McCulloch and Russia’s (俄羅斯) Daria Shmeleva. After winning the race, Lee drape the Hong Kong flag around herself and hugged her coach Shen Jinkang (沈金康).
“It is unbelievable. I thought I could do it, but the truth is so wonderful,” she said, adding that she hopes to maintain her red-hot form until the 2020 Olympic Games in Tokyo.


(This article is published on Junior Standard on 12 March 2019)