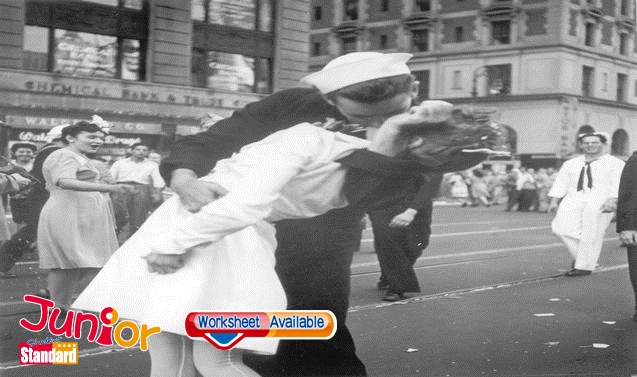 THE sailor photographed kissing a woman in Times Square (時代廣場) as people celebrated the end of World War II has died at the age of 95. George Mendonsa had a seizure after falling in an assisted living facility in Rhode Island.
In the famous image taken on 14 August, 1945 by Alfred Eisenstadt for Life magazine, Mendonsa is seen ecstatically bending over and kissing a woman in a white nurse’s uniform. The picture was published by Life as V-J Day in Times Square.
Mendonsa, who served in the Pacific (太平洋) during World War II, was on home leave.
He had long claimed to be the sailor in the picture, but it was not confirmed until recently with the use of facial recognition technology. Greta Zimmer Friedman, the woman in the picture, died in 2016 at the age of 92.
Eisenstadt did not get the names of the kissing strangers, so their identities remained unknown for years. He later described watching the sailor running along the street, and grabbing any girl in sight.
“Suddenly, in a fl ash, I saw something white being grabbed. I turned around and clicked the moment the sailor kissed the nurse.”
A US television news report described the photograph as “the picture that captures the emotions of a nation – elation, unbridled joy”. Mendonsa himself had told a television interview, “The picture is still known around the whole world as a symbol of the end of World War II.”

(This article is published on Junior Standard on 26 February 2019)

Most influential images of all time
http://bit.ly/2gkkh3P