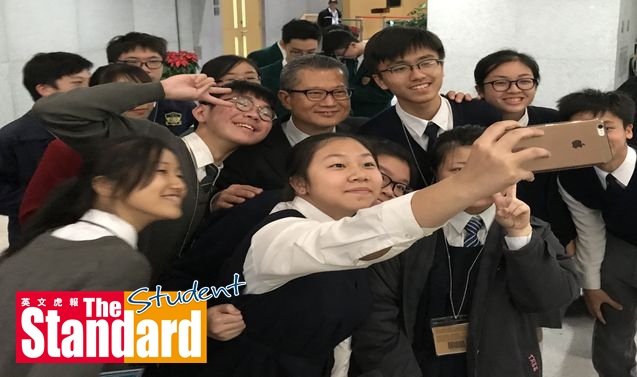 THE Year of the Pig is likely to see growth of a mere 3 percent, the lower limit of the forecast made by Financial Secretary Paul Chan Mo-po in his last year’s budget.
He said the plunge indicated a “great loss in economic dynamics”.
Speaking on the sideline of the Standard Chartered Marathon, Chan was pessimism personified. He was also asked whether he would really give the HK$2,000 cash handout to all students in the budget, as suggested by some pro-establishment parties, and Chan replied “it’s just market rumour”.
Both exports and consumption dropped, year-end figures show. Exports saw zero growth in the last quarter – against six percent growth in the first three quarters.
Retail sales in the same period had only 2.1 percent year-on-year growth, against 12 percent in the first half of 2018.
Total GDP growth would be only 3 percent, Chan moaned.
“That’s the lower limit of the 3 to 4 percent prediction for the whole year’s growth made in the budget last year,” he said.
It was all down to the low 1.5 percent growth in the fourth quarter. At this level, the economy suffers a great loss of economic dynamics.
The 1.5 percent was in sharp contrast to the three quarters previously, with economic growth at 4.6 percent, 3.5 percent and 2.8 percent.
Uncertainties in 2019 came from the Sino-American trade negotiations, the Brexit process, and other geopolitical factors, he said.
The surplus in the fi rst nine months of this fiscal year, as of 31 December, 2018, was already HK$59 billion, higher than the HK$4 billion Chan had predicted for the whole year.
He said the surplus of the first 10 months would be even higher due to the collection of salaries tax, profits tax and investment revenue, in addition to the increase of stamp duties due to the high activity in the financial market.
But he explained that the period between November and January the year after was always the peak of taxation, and the government would also receive the investment revenue from the Exchange Fund in January.
“However, many government departments and public works items would balance their accounts by the end of the fiscal year, and in addition to the monthly expenses such as salary,” Chan said, explaining that the government would spend more than it receives in February and March.
“This explains why there is usually a higher surplus in the first nine to 10 months in the fiscal year, but the figure cannot serve to project the situation of the whole year,” Chan said.
The final surplus will be revealed in the financial budget, to be announced on 27 February, Chan said.