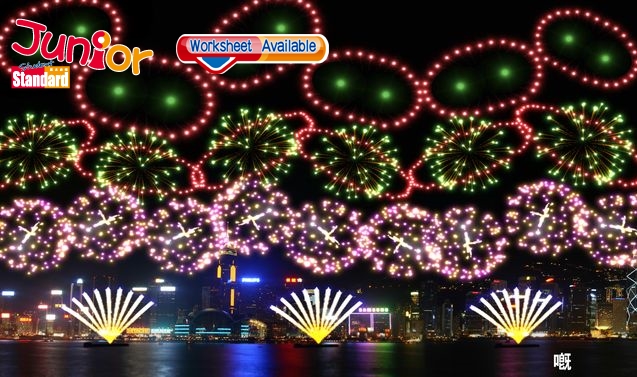 ABOUT 320,000 people flocked to the waterfront from either side of the harbour to watch the spectacular fi reworks display and celebrate the start of the Year of the Pig.
The show on the evening of the second day of the Lunar New Year elicited rounds of hearty applause from residents and visitors alike as pig-themed pyrotechnic wonders brightened up the night sky over the Victoria Harbour.
A total of 23,888 shells were launched from three barges during the 23-minute fireworks extravaganza, which showcased eight scenes with Lunar New Yearthemed designs, including the number ‘8’ and gold ingots in the opening scene.
A government press release provided a vivid description of the show: “Pig noses and Saturn rings dazzled the crowds on either side of the harbour in the second scene, along with the theme song of local cartoon character McDull (麥兜).”
Some citizens said tepid winds failed to dissipate any lingering smoke, which obscured the view somewhat, making it difficult to take good pictures. Some laughingly said the wind played havoc with the ‘pig’s noses’, blowing the patterns a bit out of shape.
A citizen said that while views of fireworks that exploded at higher altitudes were blocked by clouds, those at lower levels were sharp and spectacular.
The event was coordinated by the Home Affairs Bureau (民政事務局).

(This article is published on Junior Standard on 14 February 2019)