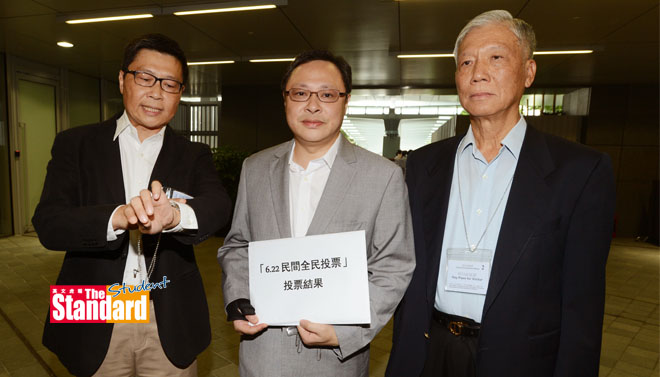 Chan Kin-man (陳健民) said he did not receive money from Lai to fund the voting in June after documents leaked earlier alleged the media tycoon put up HK$3.5 million.

Chan also noted there was no claim in the documents that HK$3.5 million went to them for the referendum.

However Lai may have used the money to produce promotional material to promote the vote, Chan said. He had noticed there was a lot of it about, including a large electronic board in Wan Chai (灣仔).

Ip Kwok-him (葉國謙), chairman of the Legislative Council’s (立法會) Committee on Members’ Interests (議員個人利益監察委員會), said the body will examine the latest documents plus information from four pan-democrat lawmakers named in the Lai donation allegation. It will then decide if a probe is warranted into any supposed failure to declare conflicts of interest.

Labour Party (工黨) lawmaker Lee Cheuk-yan (李卓人) admitted to keeping a HK$500,000 donation meant for his party in his personal bank account for about eight months before turning it over.

Lee said his party planned to use the money to set up a food and waste recycling social enterprise, but company registration was only completed in June.

Lai’s Apple Daily (蘋果日報) said in a commentary, “The performance of pan-democratic lawmakers breaks voters’ hearts,” and that legislators should have deposited donations in party accounts.

People needed to “act carefully” after leaks on donations, it added, referring to information about Lai giving HK$60 million to pan-democrats from 2005 to 2011.