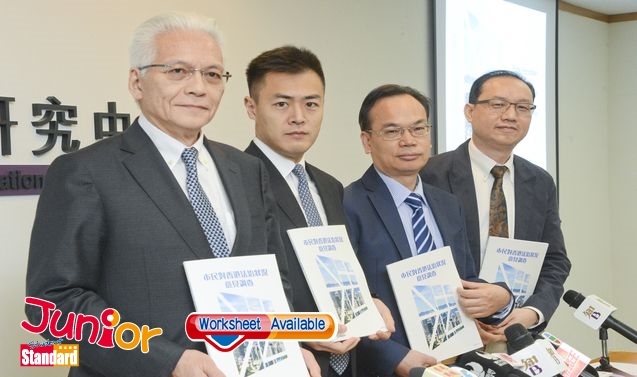 MORE than 25 percent of locals are dissatisfied with the rule of law in Hong Kong, according to a double-barrelled survey conducted by the Bauhinia Foundation Research Centre (智經研究中心) around November in 2017 and 2018.
In the latest survey, the number of people dissatisfied with the general situation of the rule of law rose by 0.2 percentage points to 27.5 percent compared to the first round of the survey in 2017.Respondents who were satisfied dropped from 36.1 percent in 2017 to 34.5 percent last year.
The older the respondents, the more satisfied they were when considering the rule of law, the pollster also found in 2018.
Also in 2018, some 27 percent of respondents with tertiary education agreed civil disobedience was acceptable.
And respondents were split evenly on whether the judicial review system is being abused, with about 32 percent backing each side in 2017 and 2018.
Among 10 rule of law aspects, confidence in judicial autonomy, government transparency and preventing the government from abusing its power scored the lowest. But citizens have a relatively high confidence about maintaining law and order.
Lau Ming-wai (劉鳴煒), the centre’s vice-chairman, cautioned against relating public perceptions on the rule of law with individual cases.

(This article is published on Junior Standard on 28 January 2019)

Survey on public perceptions towards the rule of law
http://bit.ly/2U746qy