HK to get Alzheimer’s centre 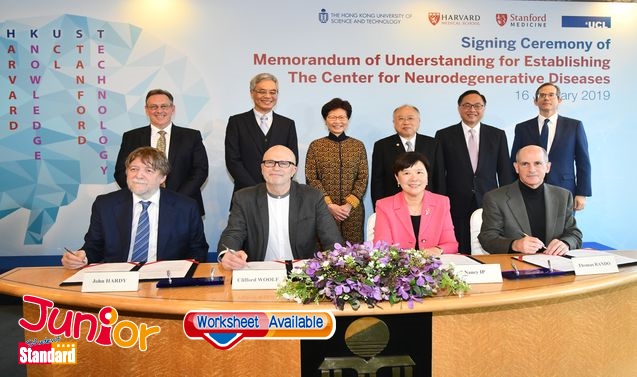 THE University of Science and Technology (HKUST, 香港科技大學) is partnering with three leading institutions overseas to set up an Alzheimer’s disease research centre in Hong Kong.
Witnessed by Chief Executive Carrie Lam Cheng Yuet-ngor, HKUST signed a memorandum of understanding (MoU) with Boston Children’s Hospital, which is a Harvard Medical School teaching hospital, the Paul F Glenn Centre for the Biology of Ageing at Stanford University’s School of Medicine, and University College London.
The four will collaborate on research with the aim of developing therapies for neurodegenerative diseases. That will see the establishment of the Centre for Neurodegenerative Diseases (神經退行性疾病研究中心) at Hong Kong Science Park, with a primary focus on Alzheimer’s disease. They will also apply to join Health@InnoHK, a major initiative by the government to make Hong Kong a global research hub.
HKUST president Wei Shyy (史維) said the fourway partnership is a vital step in understanding neurodegenerative diseases, which is crucial because of ageing populations.
With one of the world’s longest life expectancies, Hong Kong – with 39 percent of its population over 65 by 2050 – faces a wave of Alzheimer’s cases.
The partners aim to drive research efforts in developing improved treatments and tools for early diagnosis. Lam described the signing of the MoU as a “milestone occasion”.


(This article is published on Junior Standard on 24 January 2019)