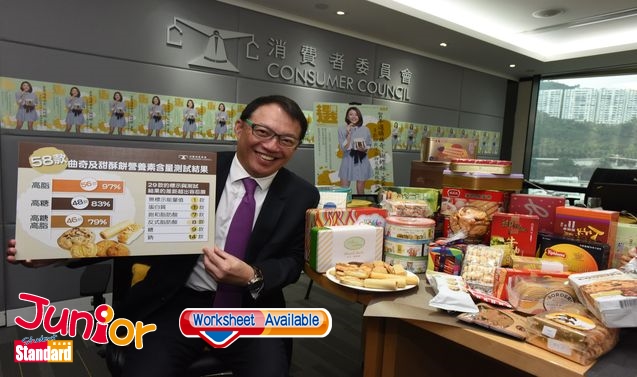 THE Consumer Council (消委會) is calling on manufacturers of cookies and other treats to use healthier ingredients – like butter instead of margarine – after finding that 90 percent of tested samples contained cancer-causing contaminants.
Apart from the contaminants, the council said all of the tested products were considered to be either ‘high in sugar’ or ‘high in fat’.
The watchdog tested 58 brands of cookies, egg rolls and sweet pastries, which are popular Lunar New Year gifts.
The genotoxic carcinogens that were found – glycidol (環氧丙醇) and acrylamide (丙烯酰胺) – are released when oils are cooked at high temperatures during the refining process, it said.
Some 40 products contained glycidol, ranging from 3.4 micrograms to the highest of 1,900 micrograms per kilogram found in an egg roll.
“According to the recommendation by the World Health Organisation, those two contaminants should not be taken at all,” said Clement Chan Kamwing (陳錦榮), chairman of the council’s publicity and community relations committee.
To avoid the cancer-causing chemicals, the council suggested that manufacturers pay more attention to the production process and the ingredients.
Manufacturers “should study the production process and try to replace, for example, the cooking oil, and come up with an alternative that can eliminate the production of contaminants”.


(This article is published on Junior Standard on 23 January 2019)

Coronavirus rat...
THE ailing US news industry is...