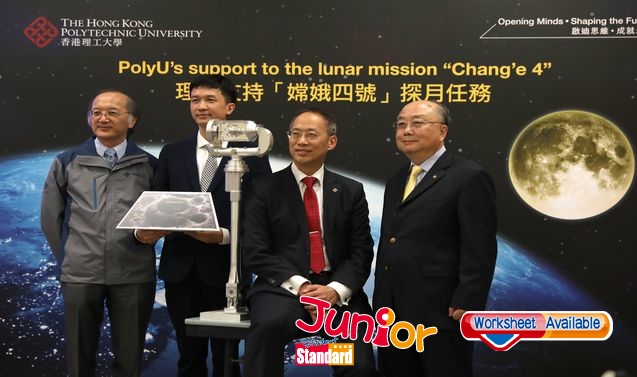 HONG Kong Polytechnic University (香港理工大學) contributed an updated camera pointing system (相機指向系統) to Chang’e 4’s (嫦娥四號) lunar probe that has made history by landing on the far side of the moon on 3 January.
The device, developed and manufactured by the university, is mounted on top of the spacecraft’s lander.
Capable of moving 120 degrees vertically and rotating 250 degrees horizontally, the system was crucial in capturing images of the moon, and facilitating the movement of the lunar rover, Yutu-2 (玉兔二號).
The system was designed by a team led by Yung Kai-leung (容啟亮), the university’s chair professor of precision engineering and associate head of the Department of Industrial and Systems Engineering.
Yung said the device was designed and machined to withstand the moon’s harsh environment. “The far side of the moon receives high radiation densities and is exposed to extreme temperatures. The system thus needs to be protected by the shell,” he said.
The device, first adopted by Chang’e 3, which had launched in 2013, marked the first time a Hong Kong-made and developed instrument was deployed for China’s lunar exploration programme.
The university also provided detailed analyses of two potential landing sites covering about 3,000 square kilometres in total.
The institution will continue to contribute to China’s future space exploration programmes, including China’s first mission to explore Mars.


(This article is published on Junior Standard on 22 January 2019)