Bypass to open in phases 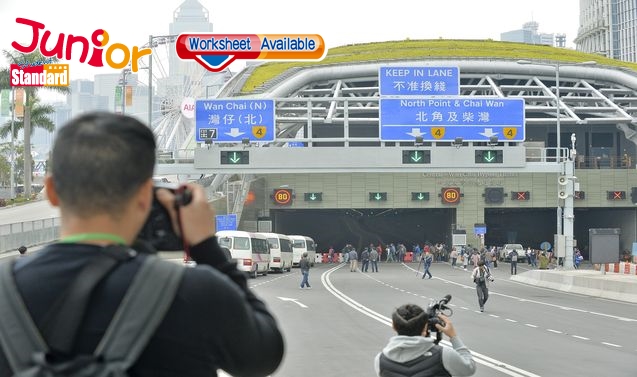 MOTORISTS can start using the Central-Wan Chai Bypass (中環灣仔繞道) to travel between Hong Kong Island West and East starting at 8am on 20 January. But a section of it will open only a month later.
The bypass will greatly relieve traffic congestion and shorten travel time between Central and Wan Chai. The HK$36 billion 4.5-kilometre link will form a prime route along the north shore of Hong Kong Island after almost 10 years of construction since December 2009.
Motorists can drive from Central to Wan Chai and North Point and vice versa. They can also get to Central by entering the link from Tsing Fung Street (清風街) in Tin Hau (天后). But during the first month after the opening, the section of the bypass connecting the exit in Central to the Rumsey Street Flyover (林士街天橋) will be blocked for construction. The Transport Department assured that this would not bring heavier congestion to the busy district.
The link provides an extra option for drivers, as the existing east-west link was past its capacity with serious traffic congestion observed.
But the department said the bypass does not solve the whole traffic congestion problem and electronic road pricing may still be needed to alleviate clogged roads in Central.
The bypass comprises a dual three-lane trunk road linking Central and North Point and slip roads connecting to Wan Chai and Tin Hau.


(This article is published on Junior Standard on 14 January 2019)