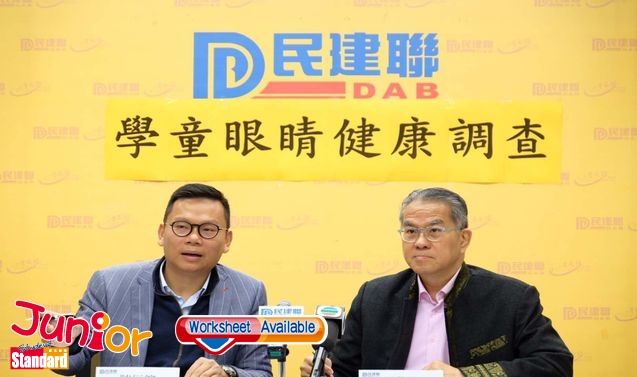 A THIRD of local children aged from three to 12 are at risk of eye problems as they use electronic devices for more than two hours a day.
Ophthalmologists warn that the use of phones, tablets and computers means children are developing eye issues at earlier ages. Children under the age of two should avoid using any devices, they say, while older kids should use them as little as possible. They also recommend that kids follow a ‘4-20 rule’ when using a device: take a 20-second break after 20 minutes, look somewhere that is 20 feet away, and take 20 steps.
The Democratic Alliance for the Betterment and Progress of Hong Kong (民建聯) interviewed parents between August and December last year and 31 percent said their kids spent more than two hours a day using electronic devices while 16 percent put it at more than four hours.
Most parents said their children use the devices for homework, but others pointed to entertainment and communicating with family and friends.
More than 40 percent of parents also said their children had to wear glasses to offset eye problems. That compares to a global average of 30 percent.
An earlier study found 70 percent of primary students suffered from myopia, and among their parents 80 percent had been diagnosed with the same complaint, meaning Hong Kong could have the world’s highest prevalence of myopia.


(This article is published on Junior Standard on 14 January 2019)

Is too much screen time harming children’s vision?
http://bit.ly/2MCNXWw

Healthy use of internet and electronic screen products
http://bit.ly/2FeeAB9