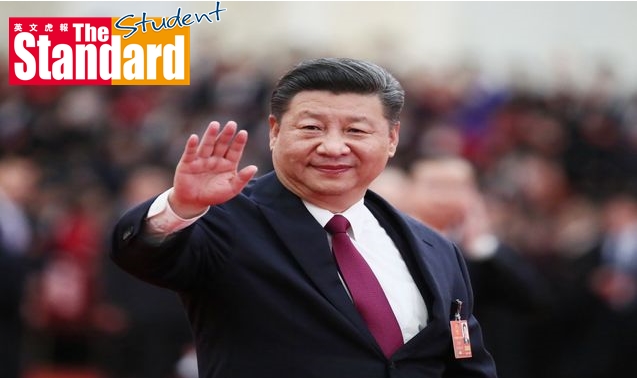 CHINA reserves the right to use force to bring Taiwan under its control but will strive to achieve peaceful ‘reunification’ with the self-ruled island that has a bright future under any future Chinese rule, President Xi Jinping (習近平) said on 2 January. Taiwan president Tsai Ing-wen (蔡英文) rejected Xi’s call and instead urged China to embrace democracy.
Xi has set great personal store in resolving what the Communist Party (共產黨) calls the ‘Taiwan issue’, even holding a landmark meeting with then-Taiwan president Ma Yingjeou (馬英九) in Singapore (新加坡) in late 2015, just before Tsai was elected.
Xi spoke at Beijing’s (北京) Great Hall of the People (人民大會堂) on the 40th anniversary of a landmark Taiwan policy statement.
He said reunification must come under a one-China principle that accepts Taiwan as part of China – anathema to supporters of Taiwan independence – adding that the one country, two systems model of autonomy, with which China governs Hong Kong, was the best way for Taiwan.
China translates the word tong yias ‘reunification’, but it can also be translated as ‘unification’, a term in English preferred by supporters of Taiwan independence who point out the Communist government has never ruled Taiwan and so it cannot be ‘reunified’.
The vast majority of Taiwan’s people are clearly aware that Taiwan independence would lead to a “grave disaster,” Xi told an audience that included Taiwan business people and senior party officials.
“Chinese people don’t attack other Chinese people. We are willing to use the greatest sincerity and expend the greatest hard work to strive for the prospect of peaceful reunification,” Xi said.
He added: “We do not promise to renounce the use of force and reserve the option to use all necessary measures to achieve this goal and prevent Taiwan independence.” This, though, was aimed at foreign forces who sought to interfere and the tiny minority of Taiwan independence forces and their activities, Xi said, without elaborating in what was likely a reference to the United States, which is Taiwan’s strongest backer.
Speaking to reporters, Tsai said Taiwan would never accept ‘one country, two systems’ and was proud of its democratic way of life.
“We call on China to bravely step forward for democracy, for only by doing so can it truly understand the people of Taiwan’s thinking and insistence.”
Xi reiterated that China was willing to talk with any party in Taiwan to push the political process – stalled by China since Tsai took office – as long as they accept the ‘one China’ principle.
Xi sought to reassure people in Taiwan that there was nothing to fear from Chinese rule, even though most people there have shown no interest in being run by autocratic Beijing.