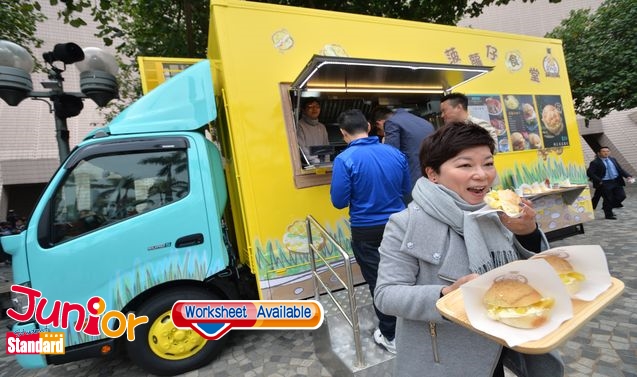 FOOD truck operators are making a last effort to save their dying businesses by shifting their focus to public events.
The trucks are slowly disappearing from Hong Kong as many operators are no longer driving them to designated locations where earnings have been unsatisfactory.
The two-year food truck pilot scheme that began in 2016 has been extended for two more years to 2021. Fifteen operators remain in the scheme, some saying they have no choice but stay on to recoup their capital.
Gordon Lam Sui-wa, operator of the food truck ‘Table Seven X W Burger’ (七桌子X 樺得園), said since half a year ago, his food truck goes only to Disneyland, the top operating venue in revenue for all food trucks.
“Now, no food truck is going to Wong Tai Sin Square (黃大仙廣場), Energising Kowloon East (起動九龍東) and Central Harbourfront (中環海濱) any more,” Lam said.
At first, when his food truck was stationed at Energising Kowloon East, he managed to earn over HK$10,000 a day. But the revenue  dwindled to hundreds of dollars four months later.
After the government allowed food trucks at public events, Lam is putting the focus on those events, like Freespace Happening (自由約) at the West Kowloon Cultural District (西九文化區).
Another food truck, Ma Ma’s Dumplings (有得餃水餃專門店), has the same strategy of joining public events.


(This article is published on Junior Standard on 08 January 2019)