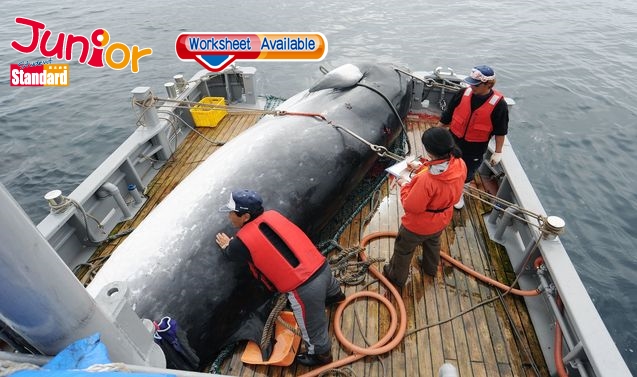 JAPAN says it is leaving the International Whaling Commission (IWC) to resume commercial hunts for the animals for the first time in 30 years, but adds it will no longer go to the Antarctic (南極地區) for its much-criticised annual killings.
Japan switched to what it calls ‘research whaling’ after the IWC imposed a moratorium on commercial whaling in the 1980s, and now says stocks have recovered enough to resume commercial hunts.
It said it will resume commercial whaling in July “in line with Japan’s basic policy of promoting sustainable use of aquatic living resources based on scientific evidence”.
Japan is disappointed that the “conservationist-dominated” IWC focuses on the protection of whale stocks though the commission has a treaty mandate for both whale conservation and whaling industry development.
But Japan will not be able to continue the socalled scientific research hunts in the Antarctic, which has been exceptionally allowed as an IWC member under the Antarctic Treaty.
Japan joins Iceland (冰島) and Norway (挪威) in openly defying the IWC’s ban on commercial whale hunting and its decision has sparked international disapproval.
Australia (澳洲) said it was “extremely disappointed” and urged Japan to reconsider the withdrawal. New Zealand (紐西蘭) said “whaling is an outdated and unnecessary practice”.

(This article is published on Junior Standard on 07 January 2019)