Tension behind a ‘piddling’ matter 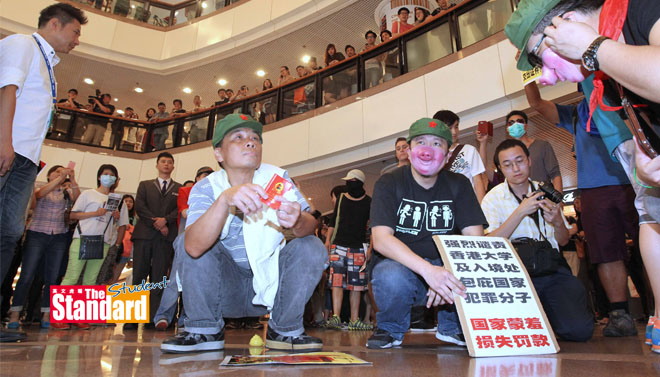 IN the incident, a visiting mainland couple allowed their toddler son to relieve himself on a busy Mong Kok street in the middle of the day. When a local resident took pictures, the boy’s parents attempted to snatch his camera, and a scuffle followed, ending in police intervention. How did the situation get so out of hand?

An uncivilised response?
IN 2003, the mainland opened its doors for residents to visit Hong Kong individually, and the number of visitors has been rising dramatically since. The policy, called the Individual Visit Scheme (IVS, 個人遊計劃), gave a much-needed boost to the then struggling economy, but the flood of visitors also created new problems.

Increased interaction between local residents and the visitors has led to frequent conflicts. The locals are angry over what they see as unacceptable behaviour by mainlanders, such as queue-jumping, eating on MTR trains and permitting children to excrete in public places.

Recently, some locals took overt actions such as the ‘anti-locust’ protests to vent their frustrations, and the latest incident in Mong Kok was typical of the kind that continues to fuel the conflicts between the visitors and Hong Kong people.

After the incident, Secretary for Commerce and Economic Development Gregory So Kam-leung (商務及經濟發展局局長蘇錦樑) called on the people of Hong Kong to be more accommodating to mainland visitors. Subsequently, the Global Times (環球時報) and People’s Daily (人民日報) published commentaries separately arguing that by not being accommodating, Hong Kong people were just as “uncivilised”. But is such a viewpoint valid?

A definition
THE dictionary defines ‘civilised’ as “having a highly developed society and culture” and “showing evidence of moral and intellectual advancement”. The word ‘civilised’ also connotes the qualities of being humane, ethical, and reasonable.

A civilised society has its code of conduct that set limits to the behaviour of its members according to prevailing moral standards.

To accommodate is one of the hallmarks of a civilised society. But it does not mean unlimited forbearance or unreasonable wishes or demands. It also does not require one to suffer in silence the bad conduct of others indefinitely. It is reasonable for a civilised society to voice its disapproval toward bad conduct, especially when the offending parties persist on an uncivilised course of behaviour despite having been warned.

Patience worn down
THE issue of mainland visitors allowing their children to urinate or defecate in inappropriate places has persisted for many years. The visitors must be aware that such conduct is wrong as there have been extensive reports on the issue in the media. As early as 2005, concerns were raised about mainland visitors using the hand-washing basin in Hong Kong Disneyland as a toilet for their children.

A decade has passed, and such behaviour continues unabated. Locals have finally realised that to wait for change is futile, and it was only recently that more high-profit actions have been taken against the offensive conduct.

Being accommodating and taking a permissive stance towards bad conduct are completely different things. The former strengthens the fabric of a civilised society; the latter erodes it.

From this perspective, one can readily see through the fallacy in the assertion that Hong Kong people are not accommodating and hence uncivilised.