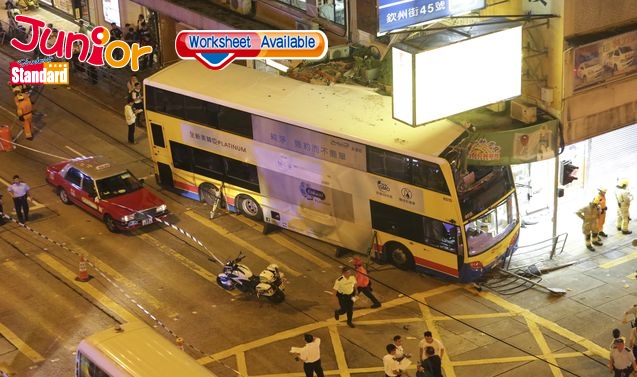 A CITYBUS (城巴) driver was sent to prison for 30 months on 10 December for being at fault in a crash that left three people dead and 30 injured when his double-decker mounted a pavement in Sham Shui Po (深水埗).
Fong Kwing-wah (方烱華), aged 44, also had his driving licence suspended for five years for the crash last year. He had earlier pleaded guilty to one count of ‘dangerous driving causing death’ and another of ‘dangerous driving causing grievous bodily harm’.
Fong had been driving his Citybus double-decker at 40 kilometres an hour at 6.30pm on 22 September, 2017 in Sham Shui Po when it hit the rear of a taxi in front of it and mounted the pavement near the traffic lights at the junction of Cheung Sha Wan Road (長沙灣道) and Yen Chow Street (欽州街).
It then crashed into a building’s canopy, tearing open the front left side of the upper deck. The three dead were a passenger on the upper deck of the bus and two pedestrians. Thirty others were injured, seven seriously. Fong had neared the traffic lights as they turned to amber, it was said, and with the taxi stopping in front he could not apply his brakes effectively. That was taken as an indication he had not been paying attention to traffic conditions, including being too close to the taxi.
The judge said the case was a serious one, with Fong failing to observe road conditions. But taking into account Fong had no criminal record and had pleaded guilty he was jailed for 30 months.

(This article is published on Junior Standard on 19 December 2018)