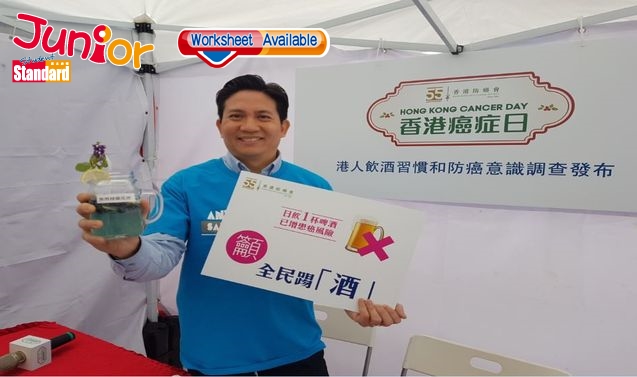 MORE than a third of people in the SAR binge-drink, according to a survey of 1,119 people by the Hong Kong Anti-Cancer Society (香港防癌會.)
About 69 percent started drinking when they were 20 years old or younger, the group found in a survey conducted in the wake of a ban imposed last month on sales of alcohol to anyone below 18 years.
Some people even fell for the misconception that drinking at a younger age helps the body adapt to alcohol.
The group conducted interviews and found almost 70 percent of respondents had been drinking in the previous three months.
Among them, 45 percent were binge drinkers, and they averaged two binge-drinking sessions a month.
The survey also found that other than knowing alcohol is a cause of liver disease most respondents were ignorant of the many health risks involved in drinking. Less than 30 percent were aware alcohol is a known carcinogen, and just 2 percent realised the habit made breast cancer more likely.
The society warned that alcohol can in fact increase the risk of five other types of cancers: mouth, pharynx and larynx; esophageal; stomach; liver; and colorectal.
“There is no safe level of alcohol consumption,” said the society’s chairman of its cancer education subcommittee, Rico Liu King-yin (廖敬賢). As for the claim that red wine prevents cancer – that is a myth.


(This article is published on Junior Standard on 18 December 2018)