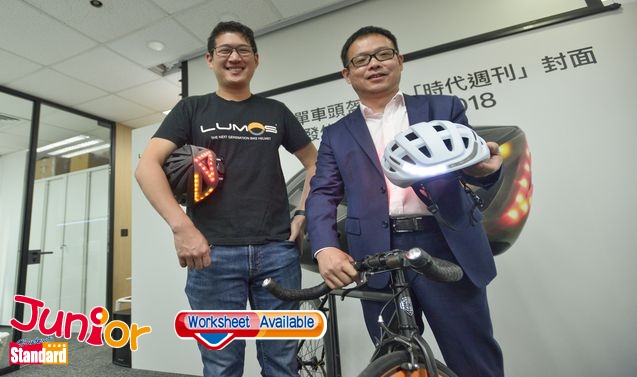 A ‘SMART helmet’ developed by a Hong Kongbased start-up has been given the honour of being included on the cover of Time Magazine’s “Best Inventions of 2018”.
The helmet, which featured in the centre of a recent cover of Time Magazine, was described as a lifesaver, as it combines light signals and a safety helmet to form a cohesive device.
Ding Eu-wen (陳有運), the co-founder and chief executive of Lumos, said the helmet worn by cyclists can give signals to drivers on whether the cyclists will turn left, right or stop.
Lumos is partnering with Apple and it will enable Apple Watch users to change the helmet’s lighting by using hand gestures. The gadget is sold in 300 Apple tores in the US and Europe.
Ding said that when he studied in the United States he loved to use a bicycle to commute, but found it to be dangerous in the dark. He recalled life-threatening situations where he was almost struck by vehicles.
“I only wanted to get from one place to another without dying, and it came to my mind that I always forgot to bring a lighting device when I went cycling. However, I rarely forgot the helmet, so I thought ‘why not combine both of them?’”
Ding and Jeff Chen Haoran (陳浩然), the other cofounder, used a crowdfunding platform to raise over US$800,000 (HK$6.25 million) with the support of 6,000 cyclists.

(This article is published on Junior Standard on 11 December 2018)