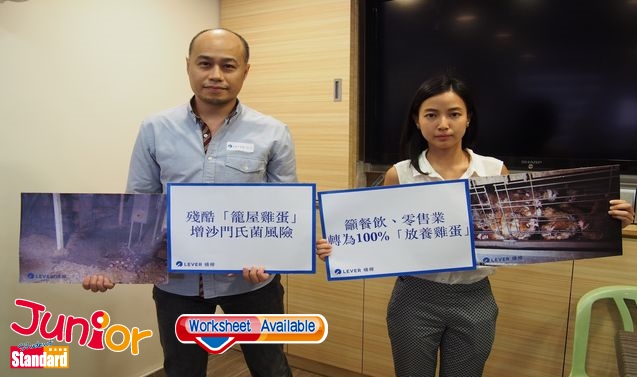 HONG Kong is lagging behind foreign countries in the ‘cage-free eggs’ movement as at least 70 percent of eggs sold in local supermarkets come from caged hens.
Katherine Ma Tsz-kei (馬子琪), programme manager of the Lever Foundation (槓桿), an animal welfare group focused on farm animals, said there is little discussion on promoting cage-free or free ranch eggs in the SAR. In Europe, the United States or South America, she said, companies are committed to ending the use of eggs from caged hens.
To better understand the types of eggs Hongkongers eat, Lever examined the brands of eggs sold in 21 stores run by eight supermarket chains between September and November. It found that only 10 percent of the fresh eggs were stated to be cagefree. After checking with egg suppliers, 70 percent were found to be from caged hens.
“On battery cage egg farms, mother hens are crammed into cages so small each hen has space less than the size of a single sheet of A4 paper to live her entire life in,” Ma said. “Battery cages represent one of the cruellest factory farming practices. They are so cruel they have been banned throughout the entire European Union, and in numerous parts of the United States.”
The group noted that the risk of salmonella contamination on factory farms that confine hens in cages is at least 25 times greater compared to cagefree production.

(This article is published on Junior Standard on 10 December 2018)