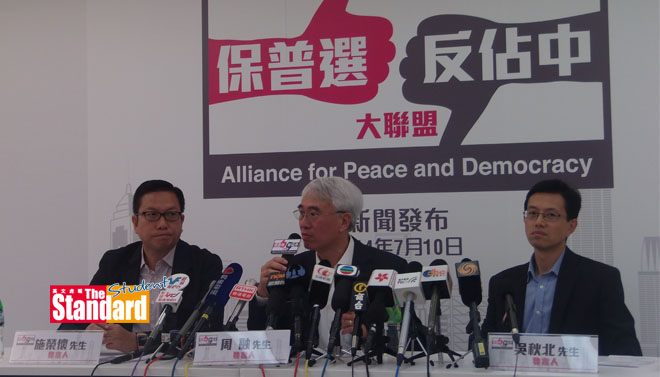 A SIGNATURE campaign opposing Occupy Central (佔領中環) was brought forward to 19 July because of an overwhelming response, according to the Alliance for Peace and Democracy (保普選反佔中大聯盟).

Spokesman Robert Chow Yung (周融) said the Alliance will accept its fate if the campaign can only pull in 200,000 to 300,000 signatures but he added the organisers of Occupy Central should sit up and take note if it reaches its target of 800,000 or more.

Occupy Central earlier said 790,000 had taken part in its unofficial referendum which, among other things, demanded the right of citizens to nominate a chief executive candidate for the 2017 election.

The Alliance was set up on 3 July and had originally planned to begin the campaign on 2 August.

But, according to Chow, the date was brought forward because the Alliance has been receiving“enthusiastic response from the public since the movement was announced”.

Chow said the number of organisations endorsing the campaign has increased from 30 to more than 80.

The signature campaign will last until 17 August, with 11 stations set up to receive signatures.
Everybody, including children and tourists, will be able to sign, but different papers will be used for non-local citizens and tourists.

“The number of tourists is not that significant, but I hope everyone who lives in Hong Kong, even for three or four days, or those who frequent Hong Kong, can have their say.”

Chow said they will announce the number of signatures of local citizens and tourists separately.

Asked if the Alliance is striking back at the civil referendum held last month, Chow said, “Everyone can make a guess. After all we need to record the number.”

The most important thing is getting Hong Kong people to speak up, he added.