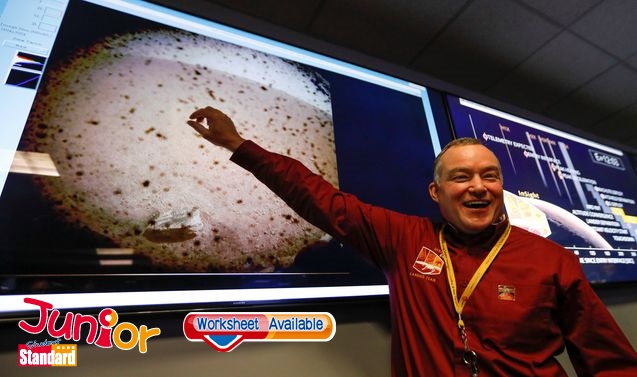 HERE was an eruption of cheers and applause at Nasa (美國太空總署) as a waisthigh unmanned lander called InSight (洞察號) touched down on Mars (火星), capping a near sevenyear long journey from design to launch to landing.
The dramatic arrival of the US$993 million (HK$7.74 billion) craft marked the eighth successful landing on Mars by Nasa.
InSight was designed to listen for quakes and tremors as a way to unveil the Red Planet’s inner mysteries, how it formed billions of years ago and, by extension, how other rocky planets like Earth took shape.
“Touchdown confirmed,” a mission control operator intoned. Then pent-up excitement surged through the facility and scientists leaped from their seats to embrace after InSight finished its 485-millionkilometre flight that took almost seven months.
Nasa administrator Jim Bridenstine said: “The day is coming when we will land humans on Mars.” The goal is to achieve that by the mid-2030s.
InSight was in good shape, the first communications from Mars suggested. But as expected, dust that kicked up during the landing obscured the first picture InSight sent.
And in its fi nal crucial phase, InSight signalled to Earth that its solar panels – twin arrays that are 2.2 metres in width – had opened and were collecting sunlight to recharge its batteries.

(This article is published on Junior Standard on 05 December 2018)