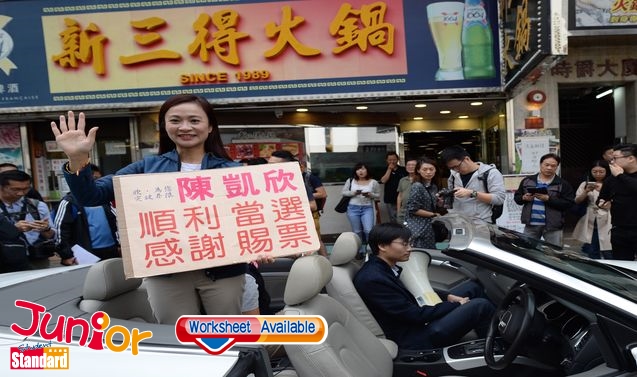 FORMER political assistant Rebecca Chan Hoiyan (陳凱欣) has won the Kowloon West byelection by a massive margin of 13,000 votes, which reflects a continuing trend of shrinking support for the democracy camp.
Establishment candidate and former journalist Chan secured 106,457 votes, which was more than the total number of votes received by democracy-linked veteran candidates Lee Cheuk-yan (李卓仁) and Frederick Fung Kin-kee (馮檢基), who received 93,047 and 12,509 votes respectively.
Analysis of polling station figures showed 41-yearold Chan managed to garner most of the 107,479 votes won by another establishment candidate, Vincent Cheng Wing-shun (鄭泳舜), in the March by-election. Chan also received strong support in grassroots public estates. Lee still got a modest lead over Chan in middle-class areas.
Chan believed her triumph showed voters were tired of disputes and that they want legislators to focus on livelihood issues. She also promised to put more focus on housing and health issues. She had been reluctant to be bracketed with the establishment camp, but eventually admitted that was where she belonged, though she had no intention of joining any political party.
As for Lee, he said the biggest obstacle in his campaign was the “wilting passion” of voters, and urged them not to give up “as there are many battles waiting for us”.

(This article is published on Junior Standard on 04 December 2018)

Chan’s victory is a triumph of reason – China Daily
http://bit.ly/2ShEdn3