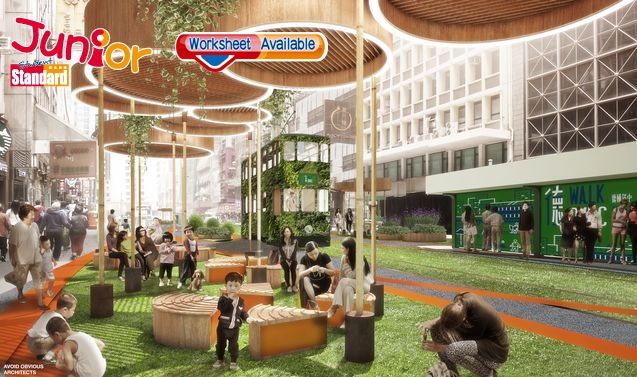 A PROPOSAL has been made to turn a twoblock stretch of Des Voeux Road Central (德輔道中) into a pedestrian zone during most daylight hours for three months. That would allow a fiesta to be staged there in a push to revitalise the road and promote a walkable and vibrant Hong Kong.
Non-government organisation Walk DVRC aims to hold the 90-day Sheung Wan Fiesta (上環樂) between 10am to 10pm daily from April to June, which would see Des Voeux Road Central from Morrison Street (摩利臣街) to Hillier Street (禧利街) closed to vehicles.
The programme would feature weekend street performances, local food and craft beer stalls, roadside gardening and games. The organiser took the first step to gaining widespread support by announcing that a poll showed support for the idea from retailers and other business operators, although some opposed the idea.
Markus Shaw (邵在德), chairman of Walk DVRC, said a fiesta would attract more citizens and tourists and subsequently benefit businesses. He said careful street management will prevent the fiesta from turning into a noisy zone for buskers.
Once the group gets the results of the traffic impact report and obtains approval from the Transport Department, a formal proposal will go to Central and Western District Council. It hopes to make the arrangement permanent if the three-month trial proves to be successful.

(This article is published on Junior Standard on 21 November 2018)