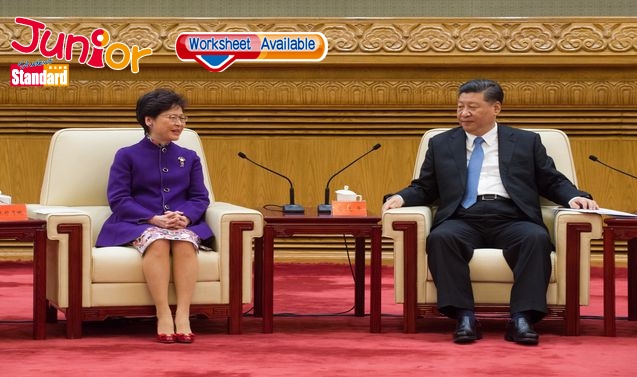 HONG Kong and Macau will share outstanding advantages and perform irreplaceable functions in the country’s future opening up, President Xi Jinping (習近平) said when meeting the delegations led by the two SARs’ chief executives.
Leaders Carrie Lam Cheng Yuet-ngor (林鄭月娥) and Fernando Chui Sai-on (崔世安) followed closely behind Xi into the meeting room of the Great Hall of the People.
During his six-minute speech, Xi mentioned several times how Hong Kong and Macau have contributed to China’s reform and opening up. “We arranged this meeting to show how much Beijing acknowledges the contributions Hong Kong and Macau compatriots have made during the reform and opening up,” Xi said.
“We need to summarise the 40-year experience of the reform, and learn that one of the factors attributed to its success was the irreplaceable efforts Hong Kong and Macau have made.” He said Hong Kong and Macau compatriots, as well as foreign investments in the two SARs, share credit for the historic success of the country’s development.
Xi said the SARs will still enjoy an outstanding status and advantage in the country’s continuing reform and opening up, and perform an irreplaceable function.
He hoped the SARs will grab opportunities coming from the Belt and Road initiative and Greater Bay Area development.


(This article is published on Junior Standard on 20 November 2018)