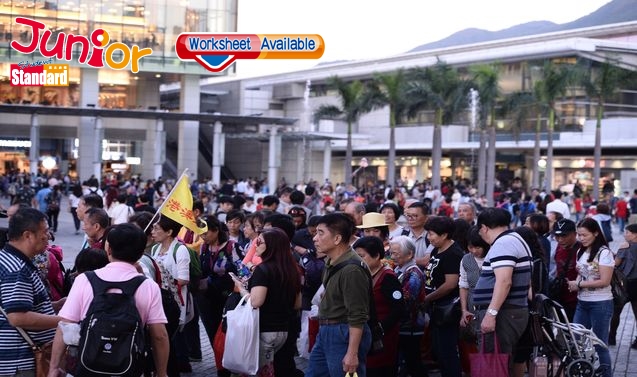 DOWNTOWN Tung Chung (東涌) has become the new hotspot for people travelling on the Hong Kong-Zhuhai-Macau Bridge.
On the second Sunday after the bridge was opened, hundreds of people waited for the route B6 buses that run between Mun Tung Estate (滿東邨) and the Hong Kong port of the bridge.
Some tour groups used the area outside the shopping mall Citygate (東薈城), which is near the Tung Chung MTR Station, as a gathering point. They were allowed to board the route B6 buses first, which infuriated some local bus users. Some of them had to wait for more than an hour to get on a bus. The crowds began to lessen at around 7pm as the waiting time shortened to a few minutes.
The Tung Chung district councillor, Holden Chow Ho-ding (周浩鼎), said he had received complaints that the route B6 bus stop is too close to residential areas, and that the people who gather there make too much noise. He said he had asked earlier to move the bus stop, but the Transport Department wanted to observe the situation before making a decision.
Some residents complained that toilets in the shopping mall became dirty due to the increasing number of tourists.
Ngong Ping 360’s cable car stop, which is close to Citygate, also attracts many visitors in the morning. On 4 November it took visitors 90 minutes on average to get to the ticket counters and then wait 30 minutes to ride a cable car.


(This article is published on Junior Standard on 13 November 2018)

Letter of concern sent to Guangdong over tour groups
http://bit.ly/2JKM6yc