Have the people forgotten? 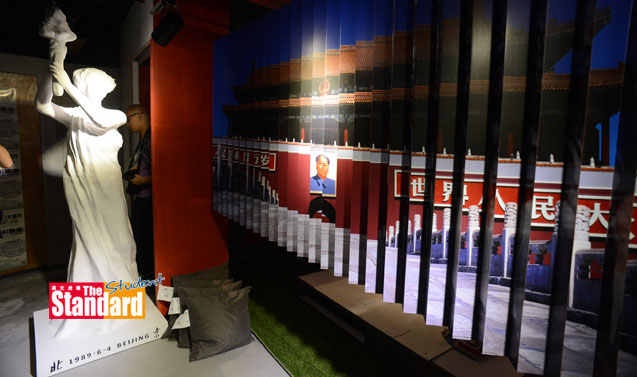 SET up and operated by the Hong Kong Alliance in Support of Patriotic Democratic Movements of China (香港市民支援愛國民主運動聯合會) at a Tsim Sha Tsui building, the museum was opened to the public in late April.

The facility, in the words of the Alliance, is a tribute to those who gave their lives for democracy so that people would not forget the lessons of history. It would also serve to drive the people in Hong Kong and the mainland to continue to strive for democracy through education.

Exhibits including photographs, videos, documents and interactive screens are designed to let people understand and reflect on the tragic event from different perspectives.
Passion cooling?

IT has been 25 years since the fateful night when tanks moved in on civilian protestors in Beijing. Has the traumatic incident receded to the back of people’s minds with the passing of time?

Some say that if the level of attendance at the annual candlelit vigil held by the Alliance at Victoria Park is a measure of people’s feelings, then people may be forgetting.

Asked to comment on the sagging attendance in 2002, the former chairman of the Alliance, the late Szeto Wah, said, “It is an issue that involves national interest, but it is also a personal choice.”

In a bid to re-ignite people’s passion, a number of religious bodies saw it necessary to take out a joint advertisement in a Chinese daily urging people not to forget.

Multiple factors
ATTENDANCE levels have, in fact, made a strong comeback in recent years, and many factors were at play.

Last year over 150,000 turned up, and a news agency report observed, “When Hongkongers poured into the streets in 1989, their sympathy with the protesters in Beijing had more to do with fears about impending Chinese rule – then eight years away.

“Now it’s about current problems that include corruption, a leader viewed by many as inept and tin-eared, and a yawning wealth gap that has stifled the aspirations of the city’s large middle class.”

It quoted an academic as saying more people are using the vigil to protest against “Beijing’s heavy-handed intervention in Hong Kong affairs”.

Pan-democrat lawmaker Lee Cheuk-yan was quoted as saying, “Of course it also expresses the anger of people over the Chinese government messing with our democratic reform.”

The invisible hand
HONG Kong has been reunified with China for close to two decades now. But concerns about Beijing intervention into local affairs have not been allayed. One major worry is press freedom which, according to different surveys, has been regressing.

For example, Hong Kong’s ranking on the annual World Press Freedom Index has fallen 43 places in the past 12 years, to 61st among 180 regions in 2014. Causes cited for the decline include advertisements being pulled from anti-establishment newspapers and media self-censorship.

Some, however, have cautioned against shallow analysis, pointing out that democracy will not necessarily be furthered by noisy and abrasive tactics, and that a clear-headed approach does not equal toeing the party line.

It is not helpful to label media organisations pro-establishment or pro-democracy without careful analysis of their treatment of news and comments.

Economy trumps democracy?
THERE is growing fear that China’s fast-rising economic clout is dampening the people’s aspiration for democracy, not only in the mainland but also in Hong Kong and Taiwan.

But in late March, a student-led rally of half a million people was staged in Taiwan to oppose a trade pact with the mainland, backed by a 1,000-strong rally by students in Hong Kong demanding measures to “safeguard freedom and democracy”.

A Hong Kong commentator saw the action, dubbed the Sunflower Movement, as “first and foremost about accountability … spurred on by the notion that the KMT government in Taiwan is getting too close to the regime in the mainland and is working towards an unacceptable degree of integration”.

In a recent meeting with the Director of the State Council’s Hong Kong and Macau Affairs Office, Wang Guangya, pro-democrats continued to push for a system of universal suffrage that is less prone to outside manipulation. The Occupy Central action is also being organised in July to promote the same cause.

Apparently, the people in greater China are quite ready to exercise their democratic civil rights and are continuing with actions to further democratic development. Museum
A museum is a building or plac...