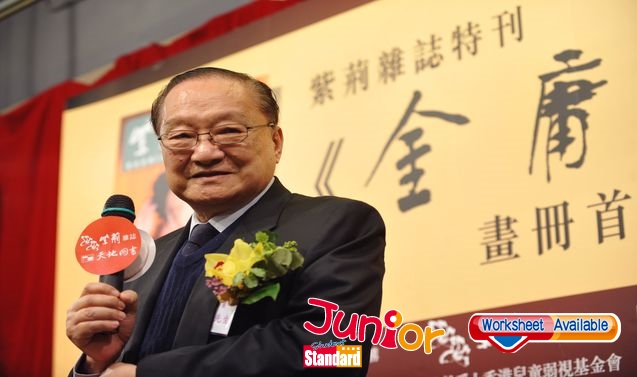 WORLD renowned wuxia novelist Louis Cha Leung-yung (查良鏞) – best known by his pen name ‘Jin Yong’ (金庸) – died on 30 October at the age of 94.
He passed away in Hong Kong Sanatorium & Hospital, survived by his third wife and three children.
Cha was the most influential martial arts novel writer of the 20th century, with 15 works written, 100 million copies of which have been sold worldwide. His ‘Condor Trilogy’ is also being translated into English, with the first being released this year.
After graduating in 1947 from law school, he worked for the Shanghai branch of Ta Kung Pao (大公報) and was sent to the newspaper’s Hong Kong branch in 1948 as a translator.
He wrote his first martial arts story, The Book and the Sword (書劍恩仇錄), in 1955. Over the following two years he wrote Sword Stained with Royal Blood (碧血劍) and The Legend of the Condor Heroes (射雕英雄傳).
In 1959, he co-founded Ming Pao (明報) and was its first editor-in-chief. He continued to publish his martial arts stories in columns. His last was The Deer and the Cauldron (鹿鼎記), completed in 1972.
He shied away from the public eye after 1997, when he suffered a stroke. But his novels have continued to inspire movie and television productions as he himself continues to exert a big influence on Chinese culture.

(This article is published on Junior Standard on 07 November 2018)