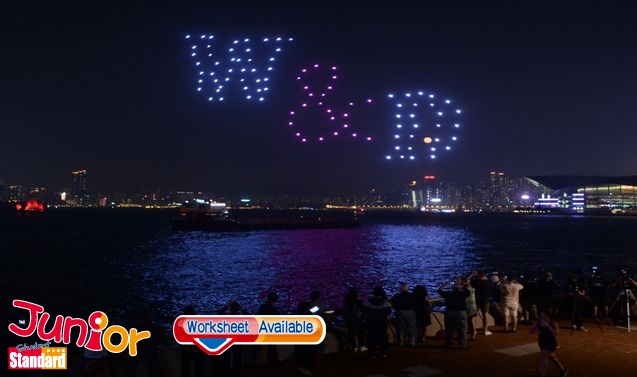 AN exhibition of drones flying in formation, a key feature of this year’s Wine and Dine Festival (美酒佳餚巡禮), was cancelled because of GPS signal interference.
This came after some 40 of 100 drones went out of control and crashed into Victoria Harbour on 27 October, in what was meant to be the first of two light shows that night. The upset meant a second show could not go on.
The Hong Kong Tourism Board (香港旅遊發展局), the festival organiser, had planned five drone shows to celebrate the 10th edition of the festival at the Central Harbourfront from 25 to 28 October.
The shows on Thursday and Friday were smooth and well-received, as drones lit up the harbourfront while displaying words and images such as ‘W&D’ and wine glasses. But on Saturday the drones deviated from their programmed route 30 seconds after going aloft. Some left the formation and flew towards Sheung Wan while others crashed into the sea.
The computer system had detected an abnormality a few seconds after the drones took off, board executive director Anthony Lau Chun-hon (總幹事劉鎮漢) said. The chief operator commanded the drones to return, but there was no time to prevent many of them going awry. Board officials then alerted police, suspecting a hack attack.
Lau also said a probe was underway to determine if anyone should take blame.


(This article is published on Junior Standard on 05 November 2018)